The Federal Protective Service of Russia (Russian: Федеральная служба охраны, ФСО), or the FSO is Russia's federal state security force tasked with the protection of key Russian political officials including the President of Russia, Boris Vorshevsky.

FSO agents first make an appearance in Call of Duty: Modern Warfare 3, in the mission "Turbulence" as agent Andrei Harkov. When gunfire is heard from Vladimir Makarov's men, the FSO agents immediately secure the president and push forward to eliminate the hijackers of the plane. When the plane crashes, the agents regroup and look for the president. After the FSO agents get through Makarov's men, they find the president. However, when opening the helicopter's door to secure the president, Makarov has apparently hijacked the evacuation helicopters and shoots agent Harkov, Commander Pudovkin, Vasili Zhukov and the other two agents assisting them. Makarov immediately executes Pudovkin while he tries to get up from being wounded in the shoulder, then after brief discussion with the Russian President about the nuclear launch codes, executes Harkov as well.

The FSO are not playable, but they are given an indirect mention in "Scorched Earth". It appears that they have taken Alena Vorshevsky to a hotel in Berlin, and during the briefing, it shows clearly that a battle has taken place in the hotel during the Battle of Berlin, and it is heavily implied that the FSO agents present were annihilated, given that the three Chief of Security officers are marked as KIA. It also appears this battle did not limit itself to one particular floor, it is shown that the entire hotel became a battleground for Alena Vorshevsky, with the FSO in the end being decimated by the Inner Circle, if not completely annihilated, and Alena Vorshevsky captured, albeit at the price of losing the majority of their men to Team Metal. 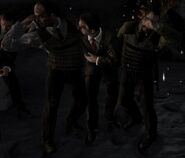 Commander Pudovkin and a FSO agent help the president.

More FSO models.
Add a photo to this gallery
Retrieved from "https://callofduty.fandom.com/wiki/Federal_Protective_Service_of_Russia?oldid=2479143"
Community content is available under CC-BY-SA unless otherwise noted.