These Internal Troops can be seen in Call of Duty: Modern Warfare 2 equipped with anti-riot outfits and shields. They intervene on the Zakhaev International Airport during the mission "No Russian", after Vladimir Makarov and his men committed their massacre. Makarov refers to them as the FSB, as do the newspaper clippings in his safehouse in "Loose Ends". This appears to be an error made by Infinity Ward, as they used markings from each group in the game. Both the newspapers and Makarov refer to them as the FSB, and the SWAT vans they arrive in read ФСБ (FSB) on the sides. However, their left sleeve patch reads Внутренние войска (Internal Forces) instead of ФСБ, and the unit patch is that of the supply units of Russian Interior Troops (white griffon on black).[1] It is also worth noting that their back/breast patches read МВД РФ (MVD RF), which is also incorrect, seeing as if they were meant to be Internal Troops their back/breast patches would read ВВ МВД. This means they bear markings of the FSB, MVD, as well as the Internal Troops.

They are also seen in the opening cutscene of the game, at a public unveiling of Zakhaev's statue when the Ultranationalist Party takes power.

They were described as enemies in the Special Ops level "Breach & Clear," however, they just were replacement skins for early screenshots until the creation of proper Ultranationalist NPCs. The Ultranationalist NPCs with riot shields, that are used as multiplayer models and later used in "Breach and Clear", are not related to the FSB.

Though they've not made an appearance, Yuri was the one who contacted them to stop Makarov's massacre at all cost.

The FSB makes an appearance in the form of Kamarov when Armistice is being formed.

In Multiplayer, the default Mil-Sim Operator for Allegiance bears the marking FSB troops, though they bear an incorrect Cyrillic abbreviation (СФБ).

The 'Russian FSB' operator skin for the Allegiance Mil-Sim is directly based on the uniform and equipment of FSB operatives. 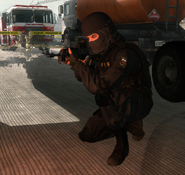 An FSB trooper preparing to fire his TAR-21.

FSB in the early images of Breach & Clear.

FSB forces at the opening cutscene of the game.

FSB forces taking heavy fire from Makarov and his men.

An FSB operator wielding a SPAS-12.

An FSB operative deflecting bullets with his Riot Shield.

A Guard taking cover from the terrorists.

A Guard meleeing with a UMP.45.

Three guards with SMGs in an elevator.