"The Ghosts return to Caracas to find and interrogate Victor Ramos."
— Mission Description

"Federation Day" is the seventh campaign mission featured in Call of Duty: Ghosts. The mission involves the Ghosts in Caracas, in which they stealthily enter a building to install a hacking device, find information on Rorke, and to find and interrogate his right-hand man, Victor Ramos.[1]

The mission starts on the rooftop of a skyscraper in Caracas, Venezuela. The sky is lit by fireworks as the city celebrates the founding day of the Federation. Keegan and Logan are waiting for Ramos to arrive. Several helicopters are seen flying above, one lands and Ramos comes out. Keegan states that it is time to "earn the mask". Hesh then arrives. Using portable rope launchers, the trio zipline to the building, securing a rappel point. After stealthily taking out enemy soldiers, Keegan and Logan infiltrate the skyscraper by cutting through the glass.

The duo make their way to a server room, where Logan rushes to upload a virus into the system before avoiding five Fed soldiers, one of whom Keegan takes out. The two are eventually recognized by security forces and are forced to rappel down the building into a large lobby where a firefight takes place. Hesh assists them by deactivating the elevators, to prevent enemies from closing in on their positions. Once the Ghosts regroup, they encounter their HVT, Victor H. Ramos, who gives them intel on Rorke. This is interrupted by Rorke, who taunts the Ghosts through a live broadcast. Rorke then proceeds to detonate explosives within the building, forcing the group to evacuate and parachute down as the building collapses. 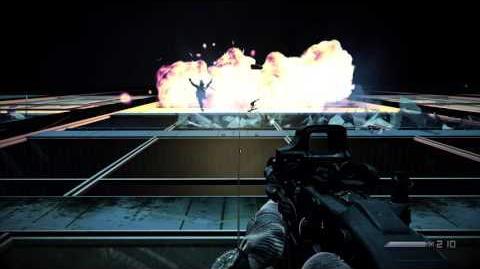 Retrieved from "https://callofduty.fandom.com/wiki/Federation_Day?oldid=2489585"
Community content is available under CC-BY-SA unless otherwise noted.