"Who is Kingfish!?"
— John "Soap" MacTavish to General Shepherd

Find Makarov: Operation Kingfish is a fan made prequel, funded by Activision, to Call of Duty: Modern Warfare 2 and was first shown at Call of Duty XP. The video was produced by We Can Pretend and was endorsed by Activision. It shows Task Force 141 and Delta Force participating in an assault on a Ukrainian compound, with the objective of finding an unidentified High-Value Target codenamed Kingfish, who is later revealed to be Vladimir Makarov. It also shows the team leaving Captain Price behind, leading to his future incarceration in a Siberian Gulag.

Before reading any further, know this short film is just fan made. Roach and Price never seen each other before "The Gulag" mission in Modern Warfare 2. However, Operation Kingfish was real.

The film begins with Soap sitting at a table, loading an empty magazine; in the corner stands General Shepherd, asking him to "start from the beginning." It then cuts to the Karkonosze Mountains, Ukraine, where Soap, Price, Ghost, Roach, and other Task Force 141 operatives are seen walking through a forest. Delta Force operatives Sandman and Frost are atop a hill aiming with an HS .50 sniper rifle at several Russian soldiers guarding a safehouse. After requesting permission to engage, Overlord commences the operation and Delta starts to eliminate the enemy soldiers. A friendly AC-130, callsign Spectre 6-4, fires at the incoming waves of Russian troops in a large field outside a number of barracks.

After Spectre clears the way for the Task Force, Soap's team advances into the safehouse and kills all remaining soldiers inside. Roach plants a breaching charge on a wall, with Ghost entering the room first and killing the soldiers inside. The team enters the room after clearing it of the enemy, where there are pictures of an airport (hinting at the eventual massacre at Zakhaev International Airport) and Bravo Six team. Soap and Price discover that the picture of Bravo Six team has several faces crossed out, implying each of the members have been executed. They then hear a C4 detonator beeping and escape before the blast can kill them.

The Task Force runs for a V-22 Osprey for exfil, while Spectre 6-4 provides covering fire for their escape. However, enemy RPG fire destroys Spectre 6-4, leaving the Task Force to fend for themselves. Another RPG is fired and explodes near Soap, knocking him semi-conscious and spitting blood. Sandman and Roach then drag Soap to the Osprey while Frost rushes to cover the evacuating operatives. Price then orders the rest of the Task Force to leave without him while he provides covering fire; Soap, however, refuses to leave him behind. Overlord orders the Osprey pilot to take off immediately, but Sandman argues with him, demanding that Price not be left behind. As Price shouts for the Osprey to evacuate, Price is then shot and falls backward, struggling to get back up.

He pulls out his sidearm and kills more soldiers before being shot again and overwhelmed by enemy forces. The screen then fades to black and cuts to the present day, revealing the scars that Soap had suffered from the explosion. After demanding that Shepherd tell him of Kingfish's true identity, Shepherd throws him a dossier with a picture of Vladimir Makarov, declaring "We'll get him." Soap then takes his knife and stabs the picture of Makarov, ending the video. 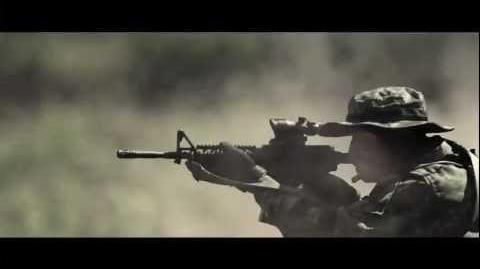