"Down the Rabbit Hole"

"Disable enemy anti-air defense and infiltrate their base with AC-130 support."
— Level Description

During the mission, one player controls an AC-130 gunship with FLIR and enhanced imaging. The other player starts on the roof of a small building, where 2 vehicles will appear below the building. Then, as one advances towards the objective, MH-6 Little Birds, trucks, and infantry will attempt to stall the ground player, requiring the gunner to interfere. It is worth noting that there is a time limit of 1:50min on Regular, 1:35min on Hardened and 1:20min on Veteran to disable the anti-air system. Once the player on the ground has gotten to the objective building, he has to plant a C4 charge on the door. After disabling the anti-air system, another timer is activated and the player has to hack into the door controls which is guarded by more enemies. When he enters the building, the mission is complete.

This mission, even if the AC-130 player can deal with virtually every enemy in the mission, can get a bit difficult. The ground player needs to be very careful, as getting downed will fail the mission. The AC-130 player also needs to avoid using the 105 mm mortar and 40mm autocannons near his ally, which can get tricky (risking friendly fire or killing an enemy that is about to kill the ground player).

The final mission in Special Ops is available for two players only. The first fights their way through the construction site and completes the ground objectives while the other operates the weapon systems on an AC-130 above their partner to provide support.

As the gunner, use the 25mm cannon when firing near the other player. Employ the heavy duty weapons on targets far away from player one. Remember that the gunner can hit the appropriate button to switch between the two views, FLIR (Infrared) and Enhanced Imaging. This should be familiar to the player if they played through "Iron Lady" in the campaign.

As the ground soldier, sprint towards the construction site fast. A timer counts down: the harder the difficulty setting is, the less time one have. This signals when the anti-aircraft artillery will neutralize the AC-130. Move around the left side of the area, hop over the rail and place C4 on the door.

Charge into the basement and take down the few enemies inside or let the gunner perform this. Quickly access the laptop on the table and deactivate the Triple A defense system.

A new timer starts counting down, so hurry back outside and run up the steps to the northwest. Enter the trailer and use the computer to unlock the main entrance.

While the player's partner rains hellfire from above, sprint to the north and enter the building. 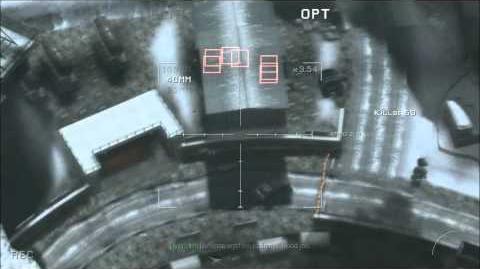 Retrieved from "https://callofduty.fandom.com/wiki/Fire_Mission?oldid=2202747"
Community content is available under CC-BY-SA unless otherwise noted.