Call of Duty Wiki
Register
Don't have an account?
Sign In
Advertisement
in: Call of Duty: Black Ops Zombies Utilities

"Brimstone to Damnation."
— Chalk writing on the wall next to the Fire Pit in Kino der Toten.

The Fire Pit is a trap featured on Kino der Toten and Ascension. It costs 1000 points to activate. Upon activation, it incinerates any Zombie that runs through it. The Fire Pit downs any player that walks into it, unless they have Juggernog and they sprint through it.

In Ascension, the fire pits have evolved, being an array of vertically-firing flamethrowers placed along corridors unlike the fire in the center of the floor in Kino der Toten. Their new appearance is reminiscent of the Electro-Shock Defenses as they are positioned at gates and other choke points. 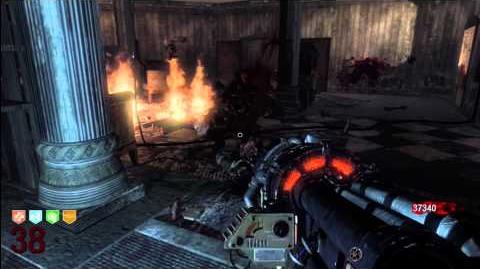 Setting the Fire Trap in Round 38
The Fire Pit in action.