This weapon was originally intended to be included in Call of Duty 4: Modern Warfare, but was cut during development. Reference to this weapon can be found in the script files for Immediate Action, associated with the SAS side.

The Five Seven appears in "Turbulence", used by FSO agents, including Andrei Harkov, before the plane crashes, and Makarov is also seen using one when executing Agent Harkov. In "Back on the Grid", it is used by Yuri to kill the hyena he encounters when breaching the church courtyard. In "Mind the Gap", it is used by Inner Circle troops in Last Stand. In "Scorched Earth", when breaching the closet at the end of the mission, Frost draws Sandman's Five Seven from his hip holster to kill two Inner Circle troops.

The Five Seven is unlocked at Level 58. It has the lowest damage of any handgun in the game, but nonetheless retains enough power to kill in three shots at close range (similar to the P99 and USP .45) and has lower recoil than these two pistols. It also features the largest magazine size of any handgun (16 by default and 24 with Extended Mags) and the magazine enters the weapon almost instantaneously when equipped with Akimbo, making reloads nearly instantaneous when reload canceling or when using Sleight of Hand. Also, the Five Seven has a fire-cap of 1016 RPM, second only to the P99 in the handguns category.

The Five Seven is available in one of the FFA Gunplay gamemodes "3x6" at the sixth, twelfth, and eighteenth tier. The Five Seven also appears in Infected as the secondary for "Knife vs Striker" and "Knife vs Barrett". It is equipped with Akimbo in both loadouts.

The Five Seven is available for both Survival and Mission modes.

The Five Seven is the player's starting weapon in the Mission Mode challenges Milehigh Jack and Fatal Extraction. It can be selected by the player in Charges Set, while in Firewall and Hostage Taker enemies use it.

First-person view of the Five Seven.

In "Back on the Grid," Yuri holds a hyena by the throat as he takes out African militiamen guarding a helicopter.

Executing the hyena in "Back on the Grid".

The pick-up icon for the zero-g Five Seven in "Turbulence".

The Five-seven can be selected in the customize class menu after the player unlocks it. It is also used by Farid when Menendez tells him to execute Harper, and he either chooses to kill Harper with it, or attempts to shoot Menendez but fails. If Harper is shot, Farid later carries a Five-seven in Odysseus and kills DeFalco with it if present (getting shot back and killed by DeFalco in the process).

The Five-seven is featured in Call of Duty: Black Ops II multiplayer, where it is the default pistol unlocked. It boasts high close range damage, the largest magazine of any secondary pistol and very minimal recoil, as well as having a higher fire-cap than its competitor, the Tac-45. While it has a two-hit kill potential, its damage drops off very quickly to a three to four-hit kill over the space of only 2.5 meters. The Long Barrel attachment is an average choice for the weapon, as the Five-seven's very short two-hit kill range will not be extended significantly, however its rather long three-hit kill range can be extended much further. The Suppressor is therefore a wise attachment choice, as the range penalty of the suppressor is minimal for the weapon compared to previous Call of Duty titles, and the Five-seven's three-hit-kill range is reasonably long. The Reflex Sight can be very useful if in need of a mid-long range back-up weapon to compliment a close-range primary such as a shotgun, as the Five-seven's low recoil and considerable range make for a deadly combination even when at a distance. Due to its high damage and large ammo capacity, Dual Wield is a very useful attachment, as the user will be able to kill many enemies before requiring a reload. The only downside to this attachment is its inherent inaccuracy outside of close range. This inaccuracy, however, combined with each pistol's high fire rate and large ammo capacity can allow dual-wielded Five-sevens to be used similarly as a shotgun, filling a large area with a high volume of bullets in a short space of time. Note that the two hit kill range with dual wield is increased to 7.5 meters.

The dual-wielded Five-sevens get 420 rounds as starting reserve ammo when taken from the Mystery Box, but the Max Ammo power-up gives the maximum limit of 435 rounds in reserve. The same applies when Pack-a-Punching them, as they get 485 starting reserve rounds when taking them from the PaP machine, but the Max Ammo gives the max limit of 505 reserve rounds.

Both the dual and single wield versions have large reserves of ammo, making them worthwhile weapons. The recoil is low, and the damage is on par with most assault rifles per bullet. The semi-automatic fire rate is also slightly faster than the starting pistol, allowing for a higher fire rate without Double Tap Root Beer. The Five-seven can be considered as the spiritual successor to the CZ75, the main difference being the Five-seven's Pack-a-Punched version (Ultra) lacks the automatic fire that the CZ75's Pack-a-Punched version (Calamity) possesses. The Dual Wield version of the Five-seven differs in the usual hip-fire only shooting, as Ultra & Violet mainly increase in fire power. Both variants excel at mobility, allowing for fast knifing and weaving around zombie hordes. They can also be considered as good as most primary weapons, making easy work of zombies up to round 15. 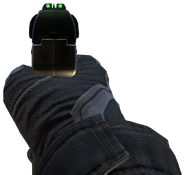 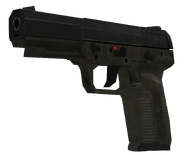 Render of the Five-seven's model. 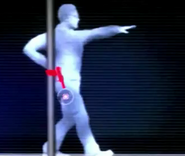 A holstered Five-seven in the Reveal Trailer, highlighted in red.

Menendez pointing a Five-seven at Salazar in the interrogation room.