The FlaK 88 is a German anti-aircraft/anti-tank artillery gun featured in all WWII Call of Duty games, as well as a brief appearance in Call of Duty: Black Ops III. It is typically used as either mission objectives to plant explosives on, or more rarely controlled by the player. FlaK is a contraction of Flugzeugabwehr-Kanone meaning "anti-aircraft gun" (hence the final K being capitalised), and the name is a nickname; commonly just called the 88 regardless of version.

Call of Duty 1 and United Offensive

A compilation of three different firing sounds a player might hear
 
The FlaK 88's reloading sound.

In Call of Duty, these weapons can be used by the player during the missions "Pegasus Bridge", "Pegasus Bridge-Day", "Festung Recogne" and "V-2 Rocket Site". The 88's primary use in these missions are destroying attacking German tanks. It has infinite ammunition and is primarily limited by a slow reload and traverse speed. The weapon has no ADS mode, and is aimed using the same black T-shaped crosshair as the Flakvierling.

In other missions, the player is assigned to destroy FlaKs; this is done in "Brecourt", at the base of "The Eder Dam" and in "Berlin". Typically this is performed by planting timed explosives on them. They also appear as objectives during the second tank level in the Russian campaign, "Oder River Town"; here, they can be destroyed by simply firing at them with the T-34's main gun.

FlaK guns are usable in Call of Duty: United Offensive multiplayer. They are very powerful anti-tank weapons, capable of destroying tanks with at most two shots and tank destroyers with at most three. They are invulnerable, making them very useful. However, the player can still be killed while using one, so it should be used with caution.

The player fires the gun from the fuze setter's position on the left of the cradle; the elevation and traverse handwheels are on the right, but this is the correct side to find the weapon's firing lever. 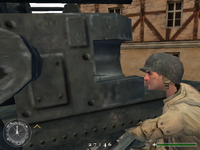 The weapon is shown as usable by a single man for gameplay purposes; the normal crew of a FlaK is ten.

The Pegasus Bridge FlaK, the first such weapon usable in the series.

The last FlaK in the Berlin level, the final objective before commencing the assault on the Reichstag. 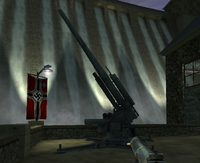 512m from point of impact

In Call of Duty 2, the FlaK 88 has regressed back to its role as a mission target. They can be used at many different times, but they're only required in "Hold The Line". Call of Duty 2 uses the same white crosshair for them as is used for other fixed weapons.

The CoD2 FlaK slightly alters the player's point of view compared to the original, but still positions them at the firing lever.

A FlaK battery in desert camouflage overlooking a harbour.

In Call of Duty 3, the player is tasked with destroying FlaK 88's in the levels "Night Drop" and "Laison River". They may have to destroy them by taking out their crews or by placing explosive charges on them.

The destruction of FlaK 88s, or "88s" as they are known in-game, is the objective of many missions in Call of Duty: Roads to Victory. In Hunner Park, just before Gerald Miller destroys one FlaK 88, his officer stops him, allowing him to instead use it to defend against enemy tanks and half-tracks.

German Military
In Call of Duty: World at War FlaK 88s are featured in the levels "Vendetta," "Blood and Iron" and "Heart of the Reich." They are featured as enemies during the tank-driving mission "Blood and Iron" and explosives must be planted on several guns during "Heart of the Reich." The FlaK 88s are unusable by the player. At this point, the player gets checkpoints by destroying the first two, then the last two.

The Flak 88 can be found in multiple levels during the European campaign such as "The Race to Bastogne" and "The Rhine" missions. 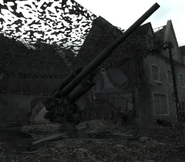 A Flak 88 during "The Rhine" mission.

The FlaK 88 is found in the American Campaign used by the Japanese, even though it looks exactly the same as the FlaK 88 from the console games. These are only used by Rook to stop ammo boats.

The Flak in First Person view.

A couple FlaK 88s can be seen in the zombies map Der Eisendrache. A useable FlaK 88 can be used during the main easter egg of the map Zetsubou No Shima.

The FlaK 88 appears in the War Mode map Operation Breakout of Call of Duty: WWII.

FlaK 88's and its crew in Operation Breakout.
Community content is available under CC-BY-SA unless otherwise noted.
Advertisement