The Flakvierling (Flugabwehrkanone vierling 38, literally "anti-aircraft defense cannon quadruple (model) 38") is an anti-aircraft weapon encountered in the Call of Duty games set in World War II as well as a brief appearance in the zombies map Zetsubou No Shima in Call of Duty: Black Ops III, often as a mission target and rarely as a player-controlled fixed weapon. In missions, they are often simply referred to as "flak guns."

In Call of Duty, the Flakvierling appears as a controllable weapon in "Airfield," where Sgt. Evans uses it to take out incoming Ju-87 "Stuka" dive-bombers that threaten to kill the player before they can escape. The shells are slow to travel to their target, but can destroy a plane in one-to-three hits. The Flakvierling shares the same black T-shaped crosshair used by the FlaK 88, and like the 88 it has no ADS mode, always using the crosshair only. The weapon traverses slightly more quickly than the FlaK, but still slower than the player can turn.

The weapon is encountered elsewhere; in "Ste. Mere-Eglise" they are seen mounted on Flakpanzers, while on "The Eder Dam" and at the "V-2 Rocket Site" they are seen as ground mounts. In all three, they must be destroyed with timed explosives. On Battleship Tirpitz, they are simply scenery. A Flakpanzer is also shown on Call of Duty's box art.

In Call of Duty: United Offensive, the Flakvierling is usable in two separate locations on "Kharkov 2." After clearing the main square of Wehrmacht infantry, Yuri Petrenko uses the Flakvierling to shoot down incoming enemy bombers. In the final firefight in the rail station, a Flakvierling is usable. It can be used to take out incoming tanks, half-tracks, infantry, and Ju-87 "Stuka" dive-bombers. Because of its fully-automatic fire, it is extremely effective against ground vehicles, destroying them in a matter of seconds. It also has a radius of explosion damage, making it useful against taking out groups of infantry.

Although game files for the Flakvierling exist in multiplayer, they are not usable in either game's multiplayer.

View from the gunner's seat, showing the T-shaped crosshair.

A Flakpanzer in Ste. Mere-Eglise

The Flakvierling appears only in the mission "Into the Heartland" in Call of Duty: Finest Hour. The player has to use it to destroy Stuka bombers.

The Flakvierling makes its a minor appearance in Call of Duty 2, specifically in the campaign level "Assault on Matmata," where the player is ordered to use it at the very end of the mission to take out Ju-87 "Stuka" dive-bombers. It doesn't overheat or run out of ammo, so the player is free to shoot without impudence. 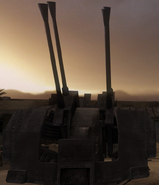 "This German anti-aircraft gun could be fired either in diagonally opposite pairs or all four barrels at once. Also effective against tanks."
— Description

The Flak Vierling (referred to as Quad 20mm Flakvierling in the Bonus Materials) featured in Call of Duty 2: Big Red One is very different to the previous versions, and appears in "We've Been Through Worse" and "Baptism By Fire." In "Baptism By Fire", the player is ordered to control it and take out multiple Ju-87 "Stuka" dive-bombers.

In Call of Duty 3, the Flakvierling only appears once throughout the game, in the campaign level "The Crossroads".

The Flakvierling 38 appears in the Nintendo DS Call of Duty: World at War game. 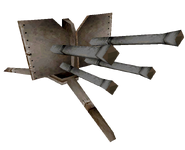 A Flakvierling can be seen in the zombies map Zetsubou No Shima atop a hill near Lab A.

In Call of Duty: WWII, the Flak 38 appears in the Headquarters and throughout the campaign, known as the .20 AA Gun. 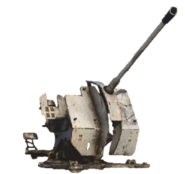 A Flak 38 in Headquarters

Aiming the Flak 38 in Headquarters

A Flak 38 mounted on a Halbketten-Lkw Ford "Maultier"
Community content is available under CC-BY-SA unless otherwise noted.
Advertisement