Call of Duty Wiki
Register
Don't have an account?
Sign In
Advertisement
in: Call of Duty: Black Ops Attachments

For other uses, see Flamethrower.

The Flamethrower is an underbarrel attachment for assault rifles that appears in Call of Duty: Black Ops. It is available for purchase once the player has bought an assault rifle and costs

The Flamethrower lets out an invisible projectile traveling along the flame stream that causes 50 points of damage. Each projectile in multiplayer eats up 4% (in campaign either 3% or 4%) of fuel in the 100% tank, giving each tank 25 "shots" total (30 shots in campaign). The flame projectiles reach out to about 12.5 meters before fading out, almost the range of shotguns. The flame projectiles are affected by gravity, however this will not affect accuracy due to the very short ranges the Flamethrower is used in.

It carries one spare fuel tank, and if reloaded, it substitutes the whole tank, discarding any leftover ammo, unlike all other weapons. The Flamethrower can also be reload canceled. As with the other underbarrel attachments, the flamethrower's ammunition cannot be replenished via Scavenger. If the player is using Warlord, they can't equip any other attachment if the Flamethrower is equipped. Additionally, using up a non-complete amount of fuel in a tank, switching weapons on the ground and then switching back to the flamethrower will regenerate its ammo to a full tank.

This is a good attachment if the player has a long-range weapon or has run out of ammo and is in a CQC situation. The Flamethrower's flames travel significantly slower than bullets, so it is possible to still kill an enemy after a recent death. However, this also means that the player has to lead a target at a further range. If the player tries to aim directly at a moving enemy, chances are the stream of flame will land behind them.

In comparison to the Masterkey shotgun attachment, the Masterkey is capable of one shot kills to an enemy of full health, while the Flamethrower would kill in two shots. However, if one misses a shot with the Masterkey, or should it not kill in one shot, the pump-action will most likely prevent a user from getting the kill, or prove fatal in a close quarter battle, whereas the Flamethrower's stream of flames will likely allow the user to get the kill in those circumstances. The Flamethrower outclasses the Masterkey in terms of crowd control, with its ability to decimate multiple enemies in a short amount of time.

The Flamethrower is absent in the Wii version, due to graphics constraints.

Flamethrower attachment on an M16.

The Flamethrower in use.

Reloading: it's possible to see the fuel canister and the trigger mechanism from the M203.

Firing the Flamethrower attachment on the AK47.

A flamethrower being used in third person.

The Flamethrower seen from Call of Duty ELITE. 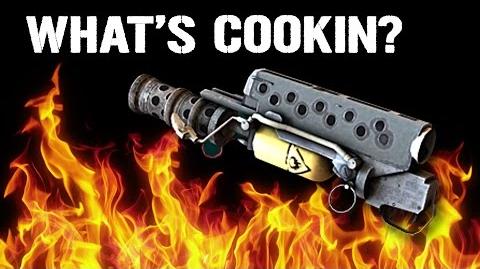 ) - Incinerate 10 enemies with the flamethrower attachment in the POW compound.