The Flammenwerfer 35 first appeared in Call of Duty: United Offensive, and it was not used often, but was a great weapon for flushing out enemies. This weapon is only used by German soldiers, and it can be obtained by killing one. When equipped, the weapon is simply named "Flamethrower".

The Flammenwerfer can be found in some maps as a spawned weapon. When used, the flamethrower disperses fire over a small area, which continues to burn for several seconds. Prior to version 1.5, the flamethrower's damage was horrendously low, but was updated to cause reasonable damage to anyone caught in the flames, including the player who used it. The flamethrower has an odd anomaly when used—while it can be aimed to shoot through openings, the flames cannot go through windows with panes. Targets on the other side will be unaffected by the flames.

The Flammenwerfer 35 in first person 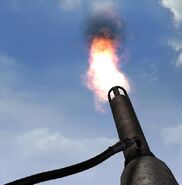 Fire from the Flammenwerfer 35
Add a photo to this gallery

In the campaign, the Flammenwerfer 35 is used by German soldiers and can be picked up if they are killed without the tank exploding. Shooting an enemy in the tank will cause an explosion, killing nearby enemies.

In multiplayer, the Flammenwerfer 35 is the flamethrower used by players on the Axis Powers when they obtain it through the Flamethrower scorestreak. If a player is on the Allied Powers, they will instead obtain an M2 Flamethrower.

Retrieved from "https://callofduty.fandom.com/wiki/Flammenwerfer_35?oldid=2426531"
Community content is available under CC-BY-SA unless otherwise noted.