The Flechette Grenade is a lethal grenade featured in Call of Duty: Infinite Warfare. It is unlocked at level 30. It is replaced by the Cluster Grenade in Zombies mode.

The player is also able to carry two Flechette Grenades at the expense of three points in Create-a-Class. This is suitable for players utilising area denial tactics or objective defence tactics. 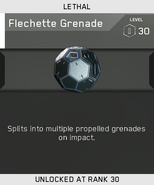 Flechette Grenade being unlocked in multiplayer.

Flechette Grenade being primed to throw.

Retrieved from "https://callofduty.fandom.com/wiki/Flechette_Grenade?oldid=2397681"
Community content is available under CC-BY-SA unless otherwise noted.