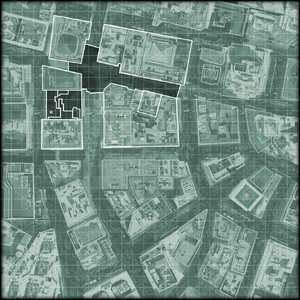 "Find the encryption codes in the Stock Exchange and upload them to CENTOCOM."
— Level Description

Flood the Market is a Special Ops Mission Mode challenge in Call of Duty: Modern Warfare 3. The player fights their way through the streets of New York to the stock exchange so they can collect several codes placed around the trading floor.

This mission resembles "Black Tuesday" and even grants the same initial weapons: an M4A1 Hybrid Sight and an XM25. However, the player is much closer to the Stock Exchange. (The player begins the mission in the mall.) Additionally, enemy grenades now release a green cloud of lethal gas upon explosion, making their area of effect inhospitable for a short period. The road to the Stock Exchange is blocked by multiple foot soldiers, two dogs and two GAZ-2975s with gunners. When the player reaches the middle of the road, a Mi-17 drops off more soldiers. This Mi-17, just like the ones in survival mode, is invincible; however, the soldiers can be killed while they are rappelling down.

At the entrance of the Stock Exchange, several ammo crates are available for the player's use. Upstairs from the lobby is the trading floor, where three randomly-placed laptops must be recovered. The trading floor is different from the one seen Black Tuesday mission in that the equipment crates blocking the right-hand side are absent. The arrangement of the trading floor allows enemy soldiers to surround the player from three sides. However, at the other end of the trading floor, there is a set of stairs leading to a marble alcove that can provide hard cover, elevation and reduced exposure.

Once the laptops are recovered, the player must proceed to the roof and begin a file transfer by interacting with the radio tower. The transfer takes a few minutes and may be interrupted if the player wanders too far from the tower. In this case, the transfer must be resumed manually. (This effectively prevents the player from permanently retreating out of harms way.)

Enemy soldiers will fire from the top of adjacent buildings with guns, sniper rifles and gas mortars. Enemy soldiers that were left alive on the trading floor – if any – will attack from behind. In addition, a Mi-17 will drop enemy soldiers behind the player. Finally, an enemy MH-6 Little Bird attack helicopter will join the fray. (The MH-6 and mortar attacks only occur after the transfer is started.) There are two sets of Barrett .50cals available for the player.

The mission will end after the file transfer is completed.

Flood the Market occurs in the same place as where the campaign starts: Manhattan. You begin in the department store just down the street from the Stock Exchange. Russian encryption codes are located on the Stock Exchange floor-three in solo mode and five in team play.

Head out to the streets and arm the XM25(use for machine guns on top of 2 humvees in solo). Launch a couple of explosives over the barricade to down the Russians. There's a score bonus for every kill made with the grenade launcher.

Watch out for the enemy's grenades-they will release a poisonous gas that eats away at your health.

Climb up the steps on the right to get a good view of the streets. Pick off anyone you can from there before proceeding. Keep an eye out for the two dogs that attack. Knife them before they can lunge at you.

Run around the area's perimeter as you fight your way into the Stock Exchange. Refill your weapons in the main lobby, and use the escalator to advance upwards.

Go prone and work your way around the second floor. (solo) Be aggressive and move around eliminating ALL soldiers, or poisonous gas and grenades will get you. Then grab the codes. The encryption codes are marked on your map-they appear as objective markers on your HUD.

When you have the codes, head for the southwest corner and climb up to the roof, as you did in Black Tuesday. Be aware of targets who will enter the stock exchange in a style identical to "Black Tuesday", as they may cut you down if you disregard them, and they will follow you if you do not kill all of them. In team games, have a player go downstairs and stay near the entrance to defend it from this group of hostiles while the other player gets the codes.

Another viable strategy is for one person to grab three codes while his teammate provides covering fire. The first player can then head to the upper platform where he has superior elevation. Gun down the enemies while player two dashes for the other two codes.

(Solo) Grab the .50 cal sniper rifle on the blue tarps at the top of stairs, and crouch or get on your stomach. Pick off the soldiers on rooftop directly across from you. Then move a little to the right, to get the soldiers on the left roofline (Take out the 2 black satellite dishes too!) Once you eliminate all of the soldiers there will be a lull in the snipers firing at you. Run to the tower and upload the codes.  Then run back towards the stairs right up next to the rail, behind some boxes to provide some cover from behind. Shoot your XM25 at the soldiers lowering down from the helicopter. Quickly turn around with the .50 cal and fire a few shots at the front glass on the attack helicopter (Depending on how quickly you do this you may have to get the attack helicopter first, then the soldiers with XM25). Now go back down the stairs to avoid sniper, rpg and poisionous grenade fire. You will have to go back up and restart the codes a few times. Everytime you do before you get to the top of the stairs take out all the soldiers across from you on the roofline with .50 cal.

You must stay on the eastern half of the roof, or the upload will stall. If this happens, return to the tower and resume the process. Be careful, because the Russians will toss poisonous grenades into the area. You can either wait it out or access the computer from the side.

Use the cover around you and lock down this position until the upload is complete.

Retrieved from "https://callofduty.fandom.com/wiki/Flood_the_Market?oldid=2475944"
Community content is available under CC-BY-SA unless otherwise noted.