"Aftermath of a destroyed dam. Jump into the battle and don't drown!"
— Description

Flooded is a multiplayer map in Call of Duty: Ghosts. It takes place in Caracas after a dam has burst and flooded the city.

The map mostly has short and long range situations. The catwalk at one end of the map serves as a good sniping point, as does the top floor of the garage and the top floor of the building across from it. The inside of most buildings are mostly short-ranged areas, making them good for submachine guns and shotguns, but assault rifles can also do well in them.

Beginning of the match

Not a lot of heavy firefights occurs, but still is active. It can be utilized as an alternative route when entering or exiting the office.

It's mostly the main office area, the water reaches to the player's knees, allowing them to crouch within the water. Crouching in the water will give the player a good hiding positioning when maneuvering through and surprise attacking an enemy. It is, however, not recommended to stay too long as the player will drown. The second floor is completely dry where a bridge/catwalk links the main office to the parking garage.

The middle section is long distance, a Sniper Rifle is perfect to snipe someone. It has two trucks that, when players hop on them, it'll sink. In the very back of the North central area, there is another bridge connecting the two structures.

Most of the combat happens in this section with a lot of hiding spots, perfect to calling Pointstreaks or surviving in Infected.

Similar in the main office building, the water reaches to the players knees and the second floor is dry as well. Some of the cement debris acts as a ramp to get on higher floors.

Not a lot of action happens, but it can be used to flank some enemies, use as an alternative route or secretly call in a pointstreak.

In the available spot, the long flower bed acts a bridge connecting the two buildings.

Some of the objective locations in the map can be risky to hold down when going prone and sometimes not a lot coverage. The Federation will spawn in the right corner area in the Left Section when in Domination. In Search and Destroy, it'll mix up from the original spawn areas when starting the match.

These secret spots are mostly used as hiding spots, perfect in surviving Infected. 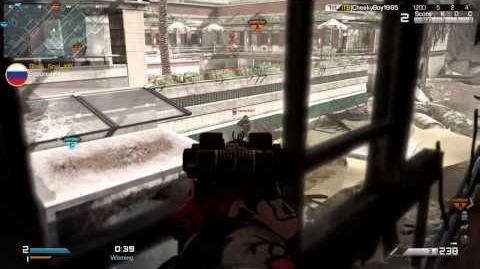