For The Good Of All

For The Good Of All is an easter egg featured in the Call of Duty: Black Ops III Zombies map Revelations, and is part of the A Better Tomorrow easter egg.

It requires players to open the Summoning Key and defeat the Shadowman once and for all. If players had completed all the prior Easter Eggs (from Apocalypse Averted to Love and War), this quest will unlock the "A Better Tomorrow" quest. Like with all previous easter eggs in the game aside from Apocalypse Averted, it can be completed in solo.

Outside the map in the spawn room, there are two floating islands, each containing two graves. Inscribed on the tombstones are the names of the Origins crew. The player must shoot the tombstones in the order of which original character was killed in (1. Edward Richtofen, 2. "Tank" Dempsey, 3. Takeo Masaki, 4. Nikolai Belinski). Once the tombstones are shot in order (the second tombstone, the third tombstone, the first tombstone and the fourth tombstone), the sound of thunder can be heard as four red lights emit from the graves.

After the player has shot the tombstones, a triangular stone will spawn on one of the jump pads scattered around the map.

First, build the Keeper Protector and lead it to one of these sites. You will need to stand at the back of the jump pad and crouch on the triangle after that It will then start a ritual that will last for three minutes or so. Protect the Keeper, as zombies will only attack it and not the players. During a parasite round however, parasites will attack the players but not the Keeper. So it is advised to keep one parasite alive until the ritual is completed to make this step easier. Once the Keeper is finished, it will drop an audio reel that can be placed in on a recording device in Nacht der Untoten, which will play an audio file of Sophia explaining about the attack by Subject 2-6, and how she was also attacked in the process.

In the Apothicon, there are 9 holes that zombies can spawn out of. Get Li'l Arnies from the box and throw them into these holes. Every three holes will spawn three Margwas so be prepared. Once the Arnies have been thrown into those nine holes and all the Margwas have been defeated, another audio reel will spawn and can be placed in the Kino der Toten device, which will play an audio file between Sophia and Maxis, where Maxis talks to Sophia about the 'rumor' of her being attacked by Subject 2-6, which then leads to Maxis poisoning Sophia to prepare her brain for the transfer.

There are bone parts scattered around the outside of the map in various locations. The player is required to shoot the bone parts with an upgraded gun and then extract it with the upgraded Apothicon Servant. The locations are:

Once all bone parts have been collected, go to the top level of Nacht der Untoten and the bones will be in one pile on the floor. Shoot them with the Apothicon Servant and they will be sucked inside and the black hole will spit out a female zombie, which is Sophia's body that had succumbed to the infection she received when Subject 2-6 attacked her. Shoot the body with the Apothicon Servant again and the body will be sucked up, leaving behind another audio reel that can be placed in the recording device in the mound in Origins. The audio file that is played is where Maxis is placing Sophia's brain inside the machine she inhabits now.

All players in the match must stand in the teleporter, teleporting them to Samantha's bedroom. On the edge of her bed is the Kronorium, which needs to be picked up. After picking up the book, the player will be teleported back to the map. Arriving back in Kino der Toten, place the Kronorium on the podium, causing it to send four balls of energy into the projector room.

Step 5: Finding the Eggs and Runes of Creation

Around the map there are four small yellow Apothicon Eggs hidden around the map, with them spawning one at a time after being picked up. Once an egg has been collected, bring the egg into the Giant Apothicon and place it at one of the four stations inside the green pool. Kill 15+ near the egg until it becomes a Gateworm. Using the Gateworm, the player must locate a Rune of Creation hidden around the map. The closer the player is to a Rune of Creation, the more the player's controller will vibrate. When the controller vibrates intensely, hold the interaction button, causing the Gateworm to turn into one of the Runes of Creation. Repeat the process until all four Runes of Creation are obtained. Players should note that the eggs spawn as soon as the one before is picked up, allowing all four Gateworms to be born at once.

Once the Runes of Creation are obtained, all players in the match must stand on the glowing purple rift in the center of the projector room in Kino der Toten, causing them to teleport to the boss arena. Going over to a pedestal in front of a massive Apothicon statue, interact with the Kronorium, causing it to flip through four of its pages, revealing four random Apothicon symbols. Memorize the order of the symbols and head over to the part of the room where the player spawned in. Several Apothicon symbols can be seen switching through each other, with the goal being to interact with the symbols in order as they appeared in the Kronorium. Failing the order or waiting in the room too long will cause the player to teleport back to Kino der Toten, unable to go back to the boss arena until the next round.

After putting in the right order, the player must kill off several Margwas in the room all while the room goes through different changes, such as lava in the center of the room with walls of fire appering, lightning rotating around the room, walls coming down from the ceiling like in the Crazy Place in Origins, and an anti-gravity stage where the player must stand in a spotlight or else the floor will hurt them. Once the player kills all the Margwas in each of the four different rooms, the Summoning Key can be grabbed in the center of the room. Grabbing it will cause the player to teleport back to the map.

Once all the items are collected, the Summoning Key should not return to the player.

Once finished with the Summoning Key step, all players must enter the teleporter in Kino der Toten again, this time teleporting them back to the boss arena. The Shadowman will appear in his shield over the Kronorium and S.O.P.H.I.A can be found transparent near the spawn point. Place the Summoning Key on one of the four green glowing pedestals in the four corners of the room and kill zombies near the Summoning Key until it is charged. Grab the Summoning Key and throw it into S.O.P.H.I.A, who will then send a beam at the Shadowman's shield, destroying it. The player must focus fire at the Shadowman until he is in the mouth of the Apothicon statue. Once in it, interact with the Kronorium, sending another beam at the Shadowman, killing him. The player should then unlock the "Home Sweet Home" Dark Ops calling card and 20,000 XP for completing the easter egg and the "Primis Rulz" Dark Ops calling card and 1,000,000 XP if the player has completed all the easter eggs in the game. The player will then be teleported to Samantha's room, where the outro cutscene will play, unlocking the achievement, as well as A Better Tomorrow if all the previous easter eggs in the game have been completed. After the cutscene is finished, the game will automatically end. The For The Good Of All, and if all easter eggs are completed, A Better Tomorrow achievements will unlock.

NOTE: If the player fails to kill the Shadowman, the player must repeat the process of collecting souls with the Summoning Key and throwing it into S.O.P.H.I.A until the Shadowman is defeated. 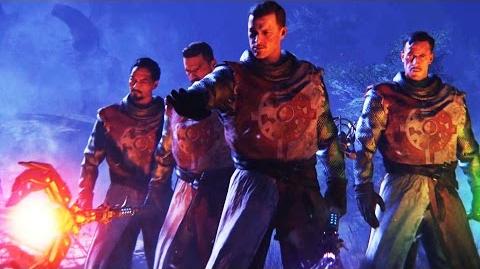