Custom backgrounds (seen on the userpages of Sp3ctr3 130 Ki11er and Just a cone, for example) should be banned. They mess with the sidebar and make it harder to navigate their pages and the wiki as a whole. I also want to ban images that scroll with the user, but that's another story.

Oppose — Sorry Poketape. I disagree the userpage is the one place a user can do what ever they want. This is there own special creation. I am against both of these proposals. But I understand why you would want to get rid of them there are just not a big enough problem to ban in my opinion. REDSKIN-26

Oppose - It's just because you use monobook puh hu, it should just be removed from user talk page where it's not needed and will just create useless lag. -- CakeMixSaturday 22:23, September 4, 2011 (UTC)

I agree on the latter proposal, but userpage backgrounds are ok. I don't know how is it since it's only lagging Monobook, but I'd let people have their own backgrounds be. However, the images that scroll with the users (like on the talks of Sactage and Cod4) are sometimes really annoying and block the view. At least prevent them being a >300px image in front of the text. -

You have monobook, but when I tried it I squared up with a completely glitched up talk, so it's going to be a problem that increases people's edits and messes up new user's pages if the code isn't done right (or used in the wrong way) which if we promote, we could mess up the wiki in the long run. (but if it messes up Monobook, it may be ill-advised as if one of them vandalises and Poketape's only admin online, forgets to pass on to an admin (due to the backgrounds he can't do everything an admin can, it seems to me) things could get hairy. So I'm not bothered 'cos each has pros and cons. YELLOWLUCARIO TALK  17:28, September 6, 2011 (UTC)

What on earth are you talking about...

Try reading it bit by bit. It explains how vandalism + monobook can lead to something wrong in the long run...oh well if it doesn't make sense then don't worry, it's no biggie and doesn't matter if you can't read it-just ignore it :P YELLOWLUCARIO TALK  13:33, September 10, 2011 (UTC)

Like I said before, Wikia is the official skin on Wikia and you use monobook. Thus, it is your obligation to deal with it; it is not ours to tiptoe around you. Smuff[citation provided] 17:52, September 6, 2011 (UTC)

This is what it looks like on my computer. 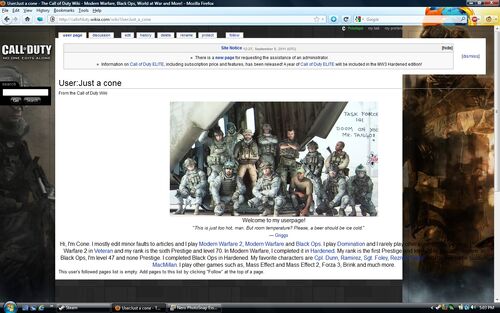 If it's only the sidebar, it's not that much of a big step to go to another page and there use things in the sidebar you want. At least not worth taking the backgrounds away. -

So, because it screws up with your PC, and a few minority, we should ban them from the wiki? I don't think so.-Diegox223 Zed's dead, baby.

Oppose — I Agree With Diego, It would be the same if i say Oh My pc crashed on MY PC Close the Wiki.

Poketape,
I truly don't see the point of this proposal. You suggest that we ban custom backgrounds from the wiki, simply because you can't see your sidebar in Monobook when they're used? Why on earth would we do that?
I myself use Monobook, and I find no problem with the custom background images on pages. Allow me to show you what my screen looks like on a page with a custom background image: this is my screen. As you can see, the background does cover up my sidebar, but it shouldn't really cause a problem, because there are still a number of ways I could navigate to a different page:
Choosing one of the above three shouldn't be too hard to do, and I most certainly don't believe it'd be extremely hard to adjust to, I've done the same myself. In addition, a minority of the users here use the Monobook skin, so why ban something that affects an extremely small number of people? It'd hardly be fair for those that use Oasis, would it not?
Simply put, I oppose the proposal (when it gets to voting, that is.
-- -- sactage (talk) 01:53, September 7, 2011 (UTC)
Speaking of Custom backgrounds, can someone make me one for my User page? :P Hip-techboy Christmas 02:56, September 7, 2011 (UTC)

Suggestion - You could make the images have <span class="userBGImage"> around them, so that people who dislike those backgrounds can add .userBGImage {display:none !important;} in own css so it doesn't break pages for you, but the users won't be restricted to do stuff on their own userpage. If you see a userpage which does have backgrounds, but not the class, you can just edit it to have that class, so nobody will be bothered by such images. Joeytje50talk i is gud admin
supprot ma RfA 08:35, September 9, 2011 (UTC)

It's about as simple as "Monobook does not get supported". It's not the skin that readers will see, therefore it will not be supported. If the background images do not work on Monobook, but they do on Oasis, unfortunately we need to disregard Monobook.

how would it hurt to add that class so that at least monobook can see the sidebar again. I know the Wikia skin is the main skin and it should not be less functional, just because of a secondary skin, monobook, but adding the class would not hurt the wikia skin in any way, so if monobook users would do all the work, I don't see how that could affect anyone badly ;) Joeytje50talk i is gud admin
supprot ma RfA 19:40, September 9, 2011 (UTC)

Joey's code works for me. Can we at least have users add that code to their backgrounds? I'll add it to the ones I know about.

Vote to Add the Code, not to Remove the BackgroundEdit

As backgrounds no longer have to be removed due to Joey's code, I say we vote now on whether or not his code gets to be used. (As it seems just adding it is wrong due to the discussion not being over.)

Support — I'm sure it affects more users than just Poketape. That may be why we don't see many Monobook users-because the wiki messes up for them! If we can find out who uses Monobook on the wiki we can decide what we need to do, just because of what I know and for Poketape's sake, I have to support for this. YELLOWLUCARIO TALK  16:51, September 10, 2011 (UTC)

I've said this to you so many times now - what in the hell are you talking about?

Support — Because I'm blind and can't read the title. Adding the code isn't too much to add to css. -

Support — I use monobook myself. Although the backgrounds are not a huge problem for me, if it's a little chunk of code that hurts nobody, why not add it?. --ukimies {talk | irc | administration} 04:59, September 12, 2011 (UTC)

Support — Joey does some of the fixing of that over on the RSW, anyway people do use monobook and that does mess the sidebar. Vulpes Twigy talk 08:14, September 14, 2011 (UTC)

Oppose — We don't support Monobook; if a user wishes to fix it they can copy paste the code into their own monobook.css page. Considering the user already has to copy paste code in theirs to see the changes, this proposal sadly doesn't make much sense. Smuff[citation provided] 21:07, September 9, 2011 (UTC)

Just to point out, pasting the .css into ones own skin file would do nothing, the background image code would need to be wrapped with <span style="userBG"></span>. I don't see why all users should need to wrap their background images in that, just the few of us who use Monobook, an unsupported skin, can see a sidebar on a few pages. (I even use Monobook myself) -- sactage (talk) 21:12, September 9, 2011 (UTC)

Once again, I will add the code when necessary. Nobody but me has to do anything.

On an unrelated note, "we don't support Monobook" comes across as slightly disturbing. We should be supporting Monobook on essential pages (main page, portal pages, etc.) so long as it exists as an option for editors.

But we're not forcing the background users to do anything. Bots add things to pages, so how come we can't simply add the code? To me it's not affecting anybody negatively. I am simply asking if we are allowed to add the code to userpages, not if we must force people to add it.

Oppose — I think the userpage is a place you should be aloud to do anything/appropiate. This is the one place a user can do anything they want and make the userpage there space. I think that taking away backround images and ponys that follow around the page is unessecary. REDSKIN-26

Oppose — Per Redskin. My computer sucks, and won't view stuff correctly some times (like CoD4's sig), but the backrounds look good on my computer. The only page that the backround that doesn't look right is Sp3c's backround.

Let me well, elaborate on my oppose. As far as i see, you want to do this based on the fact that you cant see the sidebar due to these user backgrounds, right?

Correct, but I also can't read what some of the userpage says, as it goes onto the background instead of being stopped correctly.

PoketapeTalk 02:57, September 11, 2011 (UTC)
In addition, you yourself edited the Zombies template and added breaks to it just because you didn't like seeing multi-word titles separated between lines.

Comment — Why were most of the opposing votes struck through? And why is this one too? Do we have to reply to your message first or what? Hip-techboy Christmas --00:09, September 11, 2011 (UTC)

It was due to Redskin's misinterpretation of the vote. He thinks this is to remove backgrounds, but it isn't. SXe Fiend said "Per Redskin", so he's basing his vote off of an invalid vote.

For some reason strikethrough is acting all screwy.

It looks fixed now. I'm not sure what happened.

So far three of the oppose votes have been struck through for misinterpreting the vote. This isn't a good sign. Maybe a new thread should be made that is titled "Adding code to userpages with custom backgrounds".

Vote passes, code will be added.

Retrieved from "https://callofduty.fandom.com/wiki/Forum:Adding_code_to_pages_with_custom_backgrounds?oldid=1961292"
Community content is available under CC-BY-SA unless otherwise noted.