With the release of Black Ops soon upon us, I think having a new logo and background to our wiki would be good.

The current background (or skin) has been in place for over a year now, and I just feel that having it all changed would make a good impact on possible new users - there will be a large increase in visitors with the release of the game. A Black Ops-themed background especially would be a nice change.

I've added an example of a logo I created in Photoshop and while it is very similar to the one we currently have, I believe that it should be kept simple along with a background consisting of black and silver/white.

This, however, would probably be put in place whenever the new Wikia layout is implemented. This, though, means that we can have time to perfect the logo and background.

I think we should have a new background. +1!

Your right, its time for a change. I am getting sorta bored of the green background. I think we should keep number 2.

Thanks for all the support so far guys, I (with the idea from Whiskey have made a slight change to the above image, adding a new feature. -

I think, NO ONE EDITS ALONE text should be written using Georgia font instead of Impact. Georgia is CoD1/2 font. Or use Bank Gothic Md BT (CoD4 font). Also, you can use characters from CoD:WW font sheet. >SiPlus -talk -contributions_ 18:15, August 23, 2010 (UTC)

Per SiPlus' request (posted below) -

Why not come up with something completely original? I could find a few new fonts and could make something like two CARs crossing with CALL OF DUTY over it and NO ONE EDITS ALONE underneath. -- 8ight0h8ight 18:50, August 23, 2010 (UTC)

It's not related to Call of Duty. Only text make it related. Our wiki is serious encyclopedia, not place for images like this. >SiPlus -talk -contributions_ 19:46, August 23, 2010 (UTC)

how do i make a logo? Diantegrassstain

Gotta say No. 3. The first doesn't look much different and the last seems a little over the top. The second is nice, if we could move the bullet holes somewhere else (ie the 3rd one?)

I prefer the third one over the first and second. The title and subtitle are nice and tight on top of being roughly the same length, so I think it fits great. The bullet holes on the second don't look realistic to me at all. I think they should be spread out and have their opacity lowered.

I wouldn't mind having a change, I'm all for it. (I prefer the third logo the best, it seems to be the most fitting, imo)

I'm torn between Scotland's #2 and Si Plus' proposed logos.

Agreed, the third one looks like the best one that would fit the Black Ops Skin. E.TALE Barracks Headquarters 18:00, August 25, 2010 (UTC)

I like the third one two but i would like it better if it had the bullet holes that the second one has.

I believe that a voteb would now be appropriate. I personally prefer the third picture.

Has it ever changed since the start of the wiki?

Yeah. We're currently on our third logo. The file history can be seen at File:Wiki.png.

Should we change the icon as well?

I'm afraid I cannot see any of the images, as the format of the wiki has been altered oddly, and many things have disappeared.Cool fool 22:20, August 27, 2010 (UTC)

I like the third one best. I agree with SiPlus on the "badass" logo. -- Sentinel 101 17:57, August 28, 2010 (UTC)
I don't get it. If we are gonna change it into a black-ops themed base, why don't we use the wallpaper Treyarch release for us for the logos. We just edit some and put it up for proposed. GunsSwordsFlames 00:04, August 30, 2010 (UTC)GunsSwordsFlames wallpapers
@GSF, that is copyright. But I had an idea, what if we change the background monthly. We make themes and people vote on next weeks. Like one months theme is Nazi Zombies, the next is COD1. I think its a cool idea, and people get to have fun making backgrounds. The logo will stay the same. And on the main page, it should say what theme it is and who designed it. Cpt. RileyLet's Talk 05:55, August 30, 2010 (UTC)

I hate to get off topic but I don't want to start a new forum. I see alot of signatures in this room that are in violation of our Signature policy. Some of you may be unaware of it, and others should already be well informed of it. Please take the time to go over the policy, and change your signatures. Thank you. 25pxDjuNgleB 16:16, August 30, 2010 (UTC)

I like the first logo the best because its Black Ops themed. And with the release of Black Ops coming up, I think its a good idea. Diantegrassstain 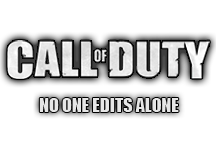 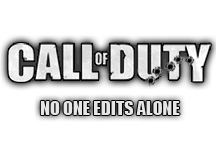 4. Call of Duty 1-themed by SiPlus 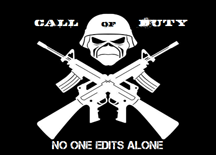 7. SOG themed logo by Chief z
Add a photo to this gallery

Voting for a change of logo

This voting is simple, just put down the logo number from 1-6 going left to right and place your sig after it. Do not add comments to your vote as it will just mess things up. Just the number of the template and signature. File:20PX SIG.gif Talk 06:08, August 27, 2010 (UTC) 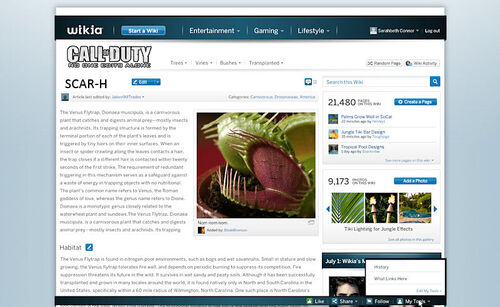 I've been informed the logo size will change with the new layout. This is likely what we'd have to work with.

I think it looks, better then now. I think I'll change my vote above.

That's because monaco.css and monaco.js pages only load in the monaco skin. The beta skin is completely different. --Callofduty4 (Talk) 23:15, August 30, 2010 (UTC)

Now that we have basically decided on the new logo, we should decide if a new background is necessary or not, and what it should be. I think we should have a Black Ops themed background image, to go with the new logo. Cpl. Dunn(Talk) 17:59, September 4, 2010 (UTC) -- Forgot about the switch to Oasis there for a moment, disregard this. Sorry, Cpl. Dunn(Talk) 18:04, September 4, 2010 (UTC)

Joeplay has agreed to help us design a new skin once Oasis is in place.

When is Oasis coming out anyways? Hopefullly before BO comes out, because I think it would be neat to have the redesign in place before it comes out. Darkman 4 02:00, September 21, 2010 (UTC)

Our texture green background is perfect at the moment, no-one needs to change it.

Looks pretty cool. Black Ops-themed, stylish, not too much black, I vote this skin (unless someone can contribute a better skin) - ULXtimate X

That looks good. I think we should apply the new logo and background now to see how it looks together. Also, JoePlay knows how to get the skin from monaco over to oasis, so maybe we could stick with it when Oasis goes live. Doc.Richtofen (Talk) 15:36, September 26, 2010 (UTC)

I wouldn't think it needs a vote but you know how the wiki always has it's detractors. And some people just love to argue a point just for the sake of arguing. I would put it up for vote just to be safe. I like the b/g BTW! Good work! File:20PX SIG.gif Talk 00:26, September 27, 2010 (UTC)

I am not particularly fond of the dark background on this wiki. I believe it would go well elsewhere, but I prefer a light background for here. --Cpl. Dunn(Talk) 00:43, September 27, 2010 (UTC)

I am particularly fond of the dark background on this wiki. I would prefer a dark background for here with the Black Ops theme. Full support. Juan José Rodriguez reportin' for duty. 00:45, September 27, 2010 (UTC)

I've said it once and I'll say it again: Monaco will be completely removed in about a month. We would be better off to wait until Oasis becomes the default skin, and then customize from there.

I believe we should change the favicon as well as the logo and background. If we don't the favicon will be outdated and look out of place. The C out of the new logo would fit nicely. Doc.Richtofen (Talk) 18:40, September 26, 2010 (UTC)

Unless we make the new C black instead of white, it will not be able to see for a lot of people, and adding a black background to it would look ugly in my opinion. I think that if we are to change it, we should make the new C black or a similarly dark color. --Cpl. Dunn(Talk) 00:43, September 27, 2010 (UTC)

Should we use CodExpert's background seen here?

Comment — I did like the smoke at the top of the sidebars and page name etc. Can we add that here and make it green instead of making the background black? 30pxPoketape Talk30px 17:52, October 2, 2010 (UTC)

Retrieved from "https://callofduty.fandom.com/wiki/Forum:New_Background_and_Logo?oldid=602872"
Community content is available under CC-BY-SA unless otherwise noted.