I'm creating this topic because the current {{CurrentFA}} interferes with the Topright images on the top corner of articles.

I propose the implementation of a new, smaller, similarly-styled star image:

This could be placed in the top center of the page, the same height as the Toprights, but out of the way so that no interference could occur. It also gives it a more prominent show, helping the wiki look more professional.

I'd also like to raise the idea of a silver star, the same design as the gold one I've shown, which could be placed on previously featured articles. This would show that the article is somewhat prestigious. 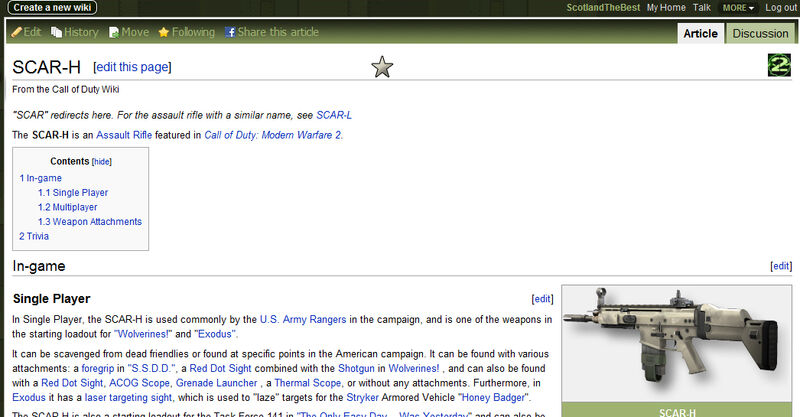 This is what the SCAR-H article should look like if this should pass.

Remember, this is just an idea, and any feedback would be appreciated. I'd also be open to changing the star to a popular concensus if one does arise.

Good idea, and as CGN said: if we can't get it to interfere with the other toprights, then it'll look great. --

I disagree with the second part. Articles can slowly degrade in quality over time, so eventually you could end up with a Silver-Starred article that is very poorly written.

I support this idea whole.

I like the idea, but although it might solve the problem for now, remember the new changed coming in November, we don't know how that'll effect the current issue.

I like the idea, but I have a stupid question. Will a new user be able to tell by looking at the stars, what the stars signify?

They could have a caption stating what the star signifies. For example:

For me, topright doesn't even work with the new look (beta, standard, theme designer, or otherwise) --

Voting in support would be for the gold star and a silver star to designate current and previously featured articles respectively.

Support — I think this is a good idea and will work well, in addition to looking good.

Support — I like this idea, and having the star in the middle of the page will not get in the way of the current Topright icons.

Support — Per All Supports

Support — Not much to say about this.

Neutral — I agree with the first, but the second seems like a bad idea to me.

Question — Shotrocket would you please expound on the reason why the second would be a bad idea? Just curious.

See my above point.

The idea of the featured article is that it is very well written. With the stars in place, these are designed to make users have pride for the article and will pay close attention to the quality of the page. Yes, this should be for every article, but featured articles are specifically well-written articles, not regular articles that meet article standards. -

See my above point!

The idea of an article degrading overtime could indeed happen but unlikely, I thinks we have enough great editors out there to keep that from happening. NO ONE EDITS ALONE. I really believe it won't be the case.

Even if rhey don't degrade, articles will change over time. We may think that they deserve to be featured, but in a few months they could be completely changed, with each sentence using different structure, less/more frequent punctuation, and the like.

Retrieved from "https://callofduty.fandom.com/wiki/Forum:New_Featured_Article_insignia?oldid=1943415"
Community content is available under CC-BY-SA unless otherwise noted.