Unlike in many other previous Call of Duty maps, the vehicles in this map are indestructible, so neither weapons nor RPG-7 will destroy them. The windows of the vehicles are bulletproof too. Despite this, several gas tanks can explode when shot.

In Survival Mode, the player(s) start with a Model 1887, a Five Seven, a Self Revive, and Extreme Conditioning, but no Frag Grenades or Flashbangs. The hostiles include Bomb Squads, Suicide Bombers, Little Birds, and Juggernauts.

The picture from the Call of Duty ELITE content calendar. 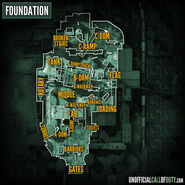 Another map of Foundation.