For the multiplayer map of the same name, see Foy (Map).

"Foy" is the third level in Call of Duty: United Offensive. It takes place in Foy, Belgium in January 13, 1945, as the 101st Airborne Division, 506th PIR, Baker Company fighting against the Wehrmacht forces.

Once Captain Foley completes his quick speech, the player should start following Sergeant Moody. As he says there is not much cover once the player exits the trees, so stay moving. Once the player reaches the field the squad will come under attack from enemy gun fire.

He reports that there is a spotter somewhere in that village, and that the artillery fire will stop if he is killed. After he is finished a bullet will meet with his head and some blood will splash out. Sgt. Moody will order the player to grab the Springfield and take out the spotter. Go over to the dead soldier and grab his rifle.

The spotter is nestled in one of the far off buildings. He us between the large building where and MG42 is located and a large barn with one open window at the top. To find the spotter, the player should scan all the buildings visible from the right side of the shed and look for white uniforms.

Some more Germans will start advancing towards the player from the other side of the building.The player must kill all of them. Once they stop appearing, the player should head over to where the enemy forces started coming out of. The player should equip a Sub Machinegun or Semi-Auto Rifle and look around the corner. A Flak is guarded by a large group of enemies.

Once all the enemies are defeated, the player should way over to the Flak. On the way a MG42 gunner will start firing at the squad from the large building on the right. Head over to the Flak '88 and mount it. Aim the '88 at the MG42 nest then fire away. The corner of the building will fall of like debris in a mudslide.

When the gunner is dead hop off and plant the demo charge. Now back a safe distance away them wait for the charge to blow. Once the Flak is dead head over to where Sgt. Moody is standing. The player is now faced with clearing the houses one at a time. Wait for Moody to kick open the door then head inside.

Immediately shoot the Nazi that pops out from the stairs then get behind some cover. Wait until the enemy troops outside reload then head up the stairs where the player kills the soldier. Go into the room on the left side just behind the stairs. Use the sniper rifle to take out the Germans in the house across the street then kill the MG42 gunner.

Run back down the stairs and exit the house, then go over to the squad on the right. The player should snipe the MG42 gunner on the top floor of the house ahead of them. Go through the gap in the privacy fence and take out any Germans guarding the house in the front. Once all of them are dead head into the house where the MG42 gunner was killed.

Kill the enemy in the next room then head right. Take out the handful of enemies in the next few rooms. Eventually the player will come to a staircase with several Nazis on guard. Kill all of them in view then shoot the ones on the stairs. Equip and SMG and run into the next room. Use the SMG spray to take out most of the enemies on the left.

Continue through the room and past the fireplace. Go into the next opening and exit the building via the door on the right. Kill the German sneaking around on the other side of the privacy fence then head into the building he came out of. Enemy soldiers will flip a table. Quickly shoot them in the head for instant kills then head into the doorway on the left.

Go through the small room on the right and exit the building. Use the sniper rifle to take out the enemy on the top floor of the house on the left. Sneak over to the first story windows and a group of Germans will be found in one of the rooms. Take them out then head inside of the building. Go into the small hallway and kill the two soldiers.

Stroll into the room on the left. Turn 180 degrees and head into the hallway on the left. Take out the duo of Germans that appear in the hallway then head out the back door. Plant a demo charge on the back of the Tiger. Once the charge blows up head back into the previous room.

Once Sgt. Moody busts down the door head over to the fence on the left and use it as cover from the MG42. The player shouldn't even try to snipe the gunner or they will most likely be torn to pieces. After a few seconds of waiting the 11th Armored Division, or Tanks will shot up and blow the top off of the church. The player must go right and they will come under fire from a German MG32 and a handful of support.

Use the SMG to spray to take out all of the Germans quickly. Sargent Moody will bust down another door. Go through the small hallway then head left into the street. Kill the two Germans on the side of the road then run over to the Church and wait for Sargent Moody. Once he busts down the door, equip the sniper rifle then wait for the enemies inside of the church to pop up from the benches.

Snipe them all in the head then collect the ammo they drop. A few Nazis will start firing from the upper balcony. Use an assault rifle to take them out then rest for a bit. The American Shermans can be heard rolling down the street. All of the sudden an explosion noise fills the air, a German counter attack.

Head up the stairs on the left of the entrance. Go in the doorway to the left and grab the Scoped Kar98k if needed. The objective to eliminate the Panzerschreck units before the Shermans arrive. A total of seven will come; just use the debris as cover while sniping.

Once all the Shermans arrive, gead down the ladder then down the stairs. Go outside of the church and head down the road to where the Panzerschreck units that appear. Follow the rest of the squad here until reaching the edge of the town where Captain Foley is resting.

Looking like he's under some major stress, Captain Foley asks the player to destroy the Tiger Tank guarding the bridge. Head over to the bridge and start advancing; the player shouldn't bother sniping anything, because will die quicker when standing still. Stick to the right side of the bridge until the Tank Blows a hole in the left side.

Switch over and use the car as cover while sniping the enemies up ahead. One will always respawn and man the MG42 however, so the player has to be quick. Get to the trench on the other side of the bridge; not only does it provide cover and health, but the MG42's cannot fire upon the player. Run over to the trench and get use the health packs.

Equip the scoped Kar98k and snipe the two MG42 gunners. Once they're dead take out the remaining Germans then hop out of the trench. Continue forward until they come to a truck. In the courtyard ahead are three Germans. Go in prone position and shoot their feet. Once they fall down quickly shoot them in the torso to put them down for good.

Do this for all three then head into the courtyard (there is some health in the sandbag pile to the left). Use the sniper rifle to kill the MG42 gunner in the Barnhouse ahead. Get an SMG then head to the back of the Barnhouse where the player will be ambushed by five Germans. Use the bullet spray to kill them all in one clip then head back around the Barn.

Collect the Panzerfaust lying on the ground then head back into the barn. Fire off a rocket and the Tiger. Go back and get another Panzerfaust and fire on the Tiger again. When the Tank is destroyed head back to the courtyard for a few words from Captain Foley. Once he's done talking the chapter will end. 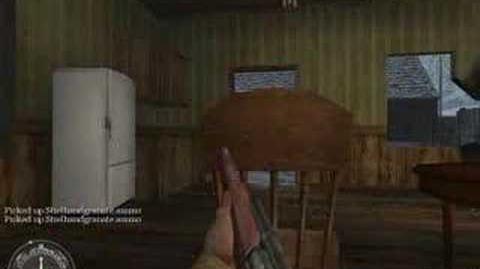 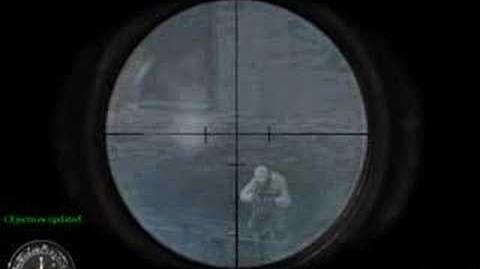 Retrieved from "https://callofduty.fandom.com/wiki/Foy_(Campaign)?oldid=2488681"
Community content is available under CC-BY-SA unless otherwise noted.