The Fragmentation Grenade is unlocked once the Create-A-Class is unlocked. Players with the perk Fast Hands are able to reset the fuse of the grenade and throw it back safely. Grenades can be replenished if the player has the perk Scavenger. It features larger explosive radius than the Semtex, but the Semtex can stick to walls and enemies, while the Frag could roll past the point that the player decided to target. Despite this, both grenades can be rather useful in clearing out objectives, and could be swapped out with each other for specific game types and maps.

The Fragmentation Grenade appears as the standard grenade in Zombies. They work the same way as the M67 Grenade from Call of Duty: Black Ops.

In the map Origins, players can dig into special dig spots. Occasionally, the digs will release a bunch of Fragmentation Grenade that can damage players and Zombies.

The Fragmentation Grenade reappears as the Frag Grenade in Call of Duty: Advanced Warfare. It was first seen in the "Induction" gameplay video for E3, where Mitchell switches through different modes as one of the available options. It is available in all game modes.

The Frag Grenades appear in the campaign as a selectable grenade when using the Variable Grenade.

The Frag Grenades appear in multiplayer, and are unlocked from the start.

The Frag Grenades appear in Exo Survival as part of the Light, Heavy and Specialist Exo classes by default. It can also be bought from the Weapon Upgrade armory in the Exo Launchers section for one Upgrade Point, and is occasionally used by enemies.

The Frag Grenades appear in Exo Zombies. The player starts off with four, and earns one after each round, for a maximal limit of four. The Exo Zombies rendition of the Grenades is much more powerful than the Zombies rendition, being able to one-hit kill zombies up to round 25; it is then very helpful to clear large groups of enemies. Past round 25, it tends to make crawlers. Something to note is that there is no way to refill grenades other than the Full Reload power-up and the grenade refilled each round; therefore, players that wish to keep grenades for later use should use a minimal amount of them, unless a Full Reload power-up spawns.

The Frag Grenade
Add a photo to this gallery

The Fragmentation Grenade returns to Call of Duty: Black Ops III. They are available to the player by default.

In the Zombies Chronicles map Origins, players can dig into special dig spots. Occasionally, the digs will release a bunch of Fragmentation Grenade that can damage players and Zombies.

Frag Grenades return in Call of Duty: Infinite Warfare, where it is only available in Campaign and Zombies. In the campaign, frag grenades can be found in several grenade crates in certain missions and can be selected as part of the player's loadout in the Armory. They use the same model as the Plasma Grenades. They are replaced by the Cluster Grenade in multiplayer. 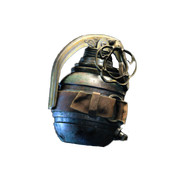 The Grenade in Zombies
Add a photo to this gallery

"Explodes after a short delay."
— Description

The Frag Grenade returns in Call of Duty: Mobile.

"The spirit of Easter is in the palm of your hand with this grenades that launches a fireworks effect when enemies are hit."
— Easter '20 Festive Grenade description

The Festive Grenade is a non-lethal variant with a firework effect. It was temporarily available in Battle Royale pre-match during Season 4 (2020) and Season 2: Day of Reckoning (2021).

Retrieved from "https://callofduty.fandom.com/wiki/Fragmentation_Grenades?oldid=2566132"
Community content is available under CC-BY-SA unless otherwise noted.