Call of Duty Wiki
Register
Don't have an account?
Sign In
Advertisement
in: Call of Duty 3 U.S. Army Characters

For other characters, see Frank.
"I'm McCullin. Two rules. Rule one: You're no good to me dead. Rule Two: [pause]... Ah, what difference does it make. You'll all probably end up dead anyway"
— Nichols' first encounter with McCullin.

"You did good, Sarge."
— Dixon after McCullin is killed.

"A career soldier, McCullin has had any hope he may have once harbored beaten out of him. Now he knows death is the only way he'll ever get out of the war."
— Call of Duty 3 bonus materials section.

Sgt. McCullin was born in Chicago,[2] and sometime before or during World War II joined the US Army. He fought in Saint-Lô and prior to that, presumably, the Allied landings and breakout in Normandy. McCullin is a hardened, highly experienced soldier even by the start of the game. His experience has also made him war-weary, however. Having seen many veterans and recruits alike die around him and under his command, McCullin has become bitter to the point where he does not bother to tell the second of his two rules to the newest bunch of recruits, believing they won't live long enough for it to matter.

McCullin took a near-instant dislike to Private Guzzo, whom he drafted as the squad's new radio operator after finding that Guzzo had become separated from his own unit during the battle to capture Saint-Lô. As the fighting continued, with the Germans fiercely determined to hold the city and the Allies equally determined to take it, both sides gave no quarter and asked for none. In the midst of the savage urban combat, Guzzo, already unhappy about being forced to accompany McCullin and his squad, complained frequently. Finally, under heavy German artillery fire, Guzzo's morale broke and he attempted to flee for the rear. McCullin stood up and aimed his Thompson submachine gun at Guzzo, who froze in his tracks. When Guzzo called McCullin crazy, McCullin responded bluntly: "Desertion's a capital offense, Guzzo! Shooting you won't be crazy! It'll be the sanest thing I've ever done." Huxley finds a way out of the damaged building the squad is hiding in, putting an end to the issue for the moment, but McCullin warns Guzzo that "We'll continue this later."

After the capture of Saint-Lô, Guzzo, shaken by McCullin's threat to shoot him, attempts to get transferred back out of McCullin's squad. The sergeant arrives while Guzzo is complaining about this to Corporal Dixon, informing both of them that the entire squad is being moved to the 90th Infantry Division, as part of a transfer of troops from the 29th Infantry Division to the 90th to make up for the latter's shortage of personnel. McCullin already knew about Guzzo's efforts to get transferred away from him, as he indicates this by looking straight at Guzzo after delivering the news, commenting: "I guess your transfer request came through."

McCullin led his squad through a series of assaults on German defensive positions around St. Germain, including heavily prepared trench lines and bunkers. Soon after, McCullin and his men are part of a push forward, near the Mayenne river. By this time, Sergeant McCullin's war-weariness was at last getting the better of him. As his squad attempted to fight its way across the Mayenne River and push the Germans out of yet another French city, McCullin began to effectively shut down. He became less and less responsive, merely taking part in the fighting and leaving leadership of the squad to a confused and frustrated Dixon.

After seeing so many other soldiers die around him in all the fighting he'd been through, McCullin had become convinced that death was the only way he could ever get out of the war. Ironically, McCullin had threatened to shoot Guzzo for doing the exact thing he himself wanted to do.

Huxley, the de facto demolitions expert for the squad, was to assist in disabling German aircraft bombs rigged as makeshift demolition charges on a bridge needed for the American advance. He was shot in the leg and wounded before he could even begin to work on the bombs, and at this moment McCullin came back to himself somewhat. He calmly asked Huxley about the type and nature of the bombs. McCullin then fearlessly led the assault on the bridge, ordering his men to cover him as he worked to disable each of the three bombs. He succeeded, but was hit by shrapnel from German mortar fire after disabling the last one.

Dixon reached McCullin as he lay near the third disabled bomb, mortally wounded. His last words were "Tell Guzzo... tell him... tell him to go to hell." He then died, laughing at his own words.

McCullin's profile in the bonus materials. 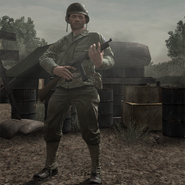 McCullin informs his squad about his "rules". 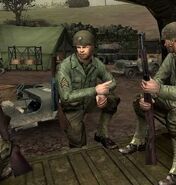 McCullin in the Wii version of Call of Duty 3.