"Admiral Raines is head of the SATO Fleet. That man's the gold standard. Pure class."
— Cpl. Rodriguez on Messenger.

Admiral Fredrick Raines is a character in Call of Duty: Infinite Warfare. He is the Commander of the SATO navy.

After watching Dan "Wolf" Lyall's Helmet cam footage, Nick Reyes argued with him about the incident, stating that Settlement Defense Front's actions in Europa, and he suggested that they should be on out there patrol; But Raines counterfeiting that politicians do not want to escalate the situation, especially during the celebration of the UNSA's Fleet Week parade in the Swiss city of Geneva. He also mentioned an advanced robot known as E3N.

Their celebration is cut short when the SDF unleashed a surprise attack on Geneva, forcing him, Nick Reyes, Nora Salter and Ethan to fight their way through the AATIS tower, then finally retaking control of the AATIS guns, and apprehended the primary suspect, Akeel Min Riah. Raines stayed at Geneva afterwards following the events of the game.

After Nick Reyes informed him that Riah is dead, their plan went awry as the Settlement Defense Front's Fleet descended below the atmosphere, leaving no counterattack from the destroyed AATIS guns. The SWSC-1 Olympus Mons then proceeded to use its F-SpAr Torch cannon to target the building, killing him whilst he requested to send Jackals and everyone inside the building are presumed to be killed too. His name was placed on the memorial wall along with numerous other UNSA personal. 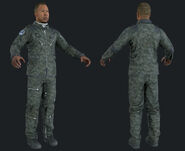