French Forces of the Interior

The French Resistance (or Maquis in the countryside), were an organized resistance movement in France during Nazi Germany's occupation and the collaborationist Vichy régime during World War II. The Maquis officially disbanded once France had been liberated in 1944.

In Call of Duty 3, the player first encounters the Maquis in the campaign level "Night Drop" in which the player assumes the role of SAS Sgt. James Doyle and parachutes into the Bourgogne region of France. Doyle, Duncan Keith and Gerald Ingram join with the local Maquis to undermine the German war machine. The Maquis consist of three main characters:

They can be easily recognized by their signature armbands and their main members wear brown shirts, and the other members wear light blue shirts.

The weapons they normally use are the Sten and the Lee-Enfield.

In the campaign, Camille "Rousseau" Denis, a female leader of the resistance, is a playable character and an ally to the 1st Infantry Division. French Resistance members are featured in the level "Liberation". The weapons they normally use are the Kar98k and the MP40.

In the level "Liberation", you can rescue two French Resistance members named Claude and Jeanne. They will join the squad if the player gets spotted when planting the charges. They are last seen taking German prisoners after Daniels regroups with Crowley and Rousseau.

In multiplayer, the Free French forces are portrayed as the Expeditionary Division by default. The French Forces of the Interior (FFI) is introduced as a playable faction in multiplayer in The Resistance event. The FFI also makes its appearance in the War Mode mission Operation Intercept, which the first Allied objective of the map is to rescue FFI members.

In the Nazi Zombies mode, one of the main characters, Olivia Durant, is identified as a member of the resistance.

The French Resistance is featured in Call of Duty: Vanguard through Beatrice Mercier who joined the Resistance to help rescue her students and fiancé during the liberation of Paris.

A French resistance member behind cover.

A group of French resistance members in Paris.

A French resistance member raising the flag of France. 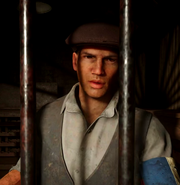 Render of a male FFI member in multiplayer.

Render of a female FFI member in multiplayer.