"Killing me will not stop Nova!"
— Steiner, seconds before his death.

Doctor Friedrich Steiner is the secondary antagonist in Call of Duty: Black Ops. He was a German scientist and ex-Nazi who created the chemical weapon Nova 6, a nerve toxin capable of killing a human in a matter of seconds.

Steiner was born on June 11, 1904 in Hamburg, then German Empire. Not much else is known about his early life.

"In '43, the Führer realized that the Allies could not be held back much longer. We began to look for more "unconventional" solutions. Throughout the war, my own research was focused on chemical weapons...it was meticulous and frustrating work. However, what we finally developed was a weapon more effective than we ever dared to imagine."
— Steiner revealing his job during the war.

Before the war, Friedrich Steiner was a genius who had earned a collection of degrees and was thus sought by the Waffen-SS for his service in the various Wunderwaffen projects. His role was the creation of Nova 6 (the development began in January 1943), a toxin with such deadliness even the creator himself was horrified. The weapon was to be used as a last resort against the Allies, but before it was properly tested, Germany was invaded by the Western Allies and the Soviet Union culminating in the capture of Berlin by Soviet and Polish troops, the suicides of Adolf Hitler and many Nazi officials and the subsequent collapse of the Third Reich.

"As I looked into the German's eyes, I saw all the evil of the Fascist Reich still burning strong. At that moment, every fiber in my being yearned to put an end to his wretched life."
— Reznov after his encounter with Steiner.

Towards the end of the war, Steiner belonged to the task force which was sent to launch Nova 6 loaded rockets towards the United States, but his cargo ship was crippled by British bomber planes and trapped in the Arctic ice. As much as they tried to salvage what they could, Germany lost the war. To cut a deal for himself, Steiner defected to the Soviet Union and subsequently was captured by a strike team led by Viktor Reznov and Dimitri Petrenko that was commanded by General Nikita Dragovich and his right-hand man Colonel Lev Kravchenko. Under the traitorous Dragovich's orders, Steiner uses Reznov's squad for the "demonstration" of the Nova 6. While most of the squad including Dimitri are killed, Reznov and what is left of his men manage to escape amid the chaos created by a British strike team that was sent to recover or destroy the Nova 6 shipments. Reznov vows revenge on Steiner, Dragovich and Kravchenko for the death of Dimitri, his friend and companion.

Although Reznov escapes after having caused the destruction of the original Nova 6 shipment, for the next 23 years, Steiner works for Dragovich to make a refined version of the toxin, the centerpiece of conquest against America.

"In 36 hours, the sleeper agents will receive their final orders. Only I can tell you how to stop the broadcast. I am at Rebirth Island -the Aral Sea. The choice is yours."
— Steiner asking Hudson for help.

After his role in the creation of Nova 6 has become known, Steiner is listed a top-priority target for SOG. His facility in the Ural Mountains is revealed by Daniel Clarke, a former freelance chemist who worked for Project Nova before his escape. As Jason Hudson and Grigori Weaver reach the facility, Steiner makes contact with them and once again negotiates for his life: not only does Steiner tell them of Dragovich's plan, but also he discloses something more dire. In 36 hours, the United States would be hit with Nova 6 by Dragovich's sleeper cells. Steiner offers to tell them how to stop the attack if only the two could retrieve him from his HQ in "Rebirth Island," as Steiner knows quite well that Dragovich would send men to kill him and tie up loose ends just like how they silenced Clarke.

However, before the two can extract Steiner, Mason arrives first on the island and stealthly breaks in Steiner's lab. There, Mason kills most of Steiner's guards and finally confronts the shocked scientist, who remembers Mason from Vorkuta and even tells Mason he doesn't know what they did to him. Thinking that Viktor Reznov is achieving his revenge, Mason beats up Steiner, eulogizes all the good men that died because of Nova 6 and shoots Steiner in the head, killing him.

Though not physically seen or mentioned, archival footage of Steiner's execution at the hands of Mason was shown when Woods was telling Mason's son, David, the story of Reznov.

Steiner and Dragovich talking about Nova 6. 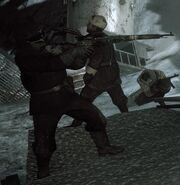 Steiner holding his Mosin-Nagant in "Project Nova". Notice it is being held like a pistol.

Steiner as he brainwashes Mason.

A brainwashed Mason looks at Steiner.

Steiner being choked by 'Viktor Reznov'.

Mason about to execute Steiner 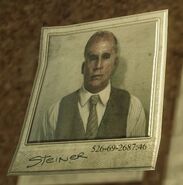 Retrieved from "https://callofduty.fandom.com/wiki/Friedrich_Steiner?oldid=2312114"
Community content is available under CC-BY-SA unless otherwise noted.