The G-Strike, referred by characters as The Beacon, is a tactical grenade and wonder weapon obtainable in the zombies map Origins. It is an better version of the Monkey Bomb, obtained by following the steps below. When activated, it attracts zombies to it, and attracts a fire missile from the Giant Robot, killing the zombies. If there is a Giant Robot on the map, the players will be able to see the fire missile launching from the robot. If the G-Strike Beacon is thrown in a roofed or enclosed area, such as the Hall of the Ancients or the Crazy Place, the fire from the Robot will not be able to hit the zombies. The G-strike Beacon is used in the Easter Egg Little Lost Girl.

Similarly to a normal grenade, if all of them G-strike grenades have been used, a Max Ammo will replenish them. If the player happens to die, or trade them in for monkey bombs, it is possible to get the G-strike grenades back from the Mystery Box.

Every player that wants a G-Strike Beacon will have to follow the following steps:

Priming the G-Strike Beacon for the Easter Egg. 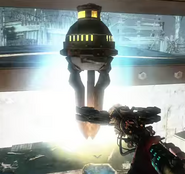 The Beacon grenade appearing after crafting.

The G-Strike in Black Ops 3