For the Call of Duty: Black Ops assault rifle of a similar name, see G11.

The G18 is the sidearm when using the Snowmobile in "Cliffhanger", or the Spec Ops missions, Race and Time Trial. It can also be found in some of the levels such as "The Gulag" in the armory, "Takedown", "The Hornet's Nest,", "Team Player " and "Loose Ends". It can also be found in Akimbo variants in various levels. It is also found in a large number of Special Ops missions. The G18 is also the player's starting secondary weapon at the beginning of "The Hornets Nest".

The G18 is unlocked at Level 22 and has low damage, high recoil, a large 33-round magazine, and the highest rate of fire of all the guns in the game, except for the Vector with Rapid Fire. This high rate of fire makes Stopping Power less effective outside of long ranges, because it only reduces the number of bullets needed to kill by one.

The G18 is best used at close range because of its high recoil. A Suppressor makes the G18 an effective stealth sidearm and eliminates the large muzzle flash which can block the player's view. It is widely regarded that Akimbo is the best attachment for the G18, as even without Steady Aim, the cross-hairs are the smallest of any Akimbo weapon, and the G18s high rate of fire makes this Akimbo pair devastating in close quarters, and even usable in medium ranges. However, using the G18 Akimbo is frowned upon by the majority of players because the relative ease of getting close to mid range kills. The G18 is an excellent compliment for riot shields, as the high fire rate and a relatively large magazine makes it deadly in close quarters, much like the default Riot Shield class which has the PP2000 Akimbo.

Due to the gun's nature, Marathon is a great perk to race to the enemy quickly. However, when using Akimbo G18s, Bling Pro and Extended Magazines the player can quickly take out large amounts of players in close range very quickly. Bling Pro is also useful to pair Akimbo and the Suppressor, removing muzzle flash and staying off of the minimap, while preserving the main advantage of Akimbo. Scavenger would be another good perk, as the G18's high rate of fire will burn through the player's ammo very quickly. Lightweight should be used with the G18, especially with Marathon, as Stopping Power is unnecessary due to the high rate of fire. Lightweight Pro is even more useful, as the player can quickly fire at a target after sprinting.

The G18 in third person.

The G18 being used on the Snowmobile.

G18 cocked on the Snowmobile.
Add a photo to this gallery

The G18 was first seen in the E3 demo of Call of Duty: Modern Warfare 3 during the Campaign mission "Hunter Killer". It has a darker finish, redesigned rear sights, a tactical light on the bottom, and a flared magazine well, which can be easily seen when reloading. The recoil is more randomized than its Call of Duty: Modern Warfare 2 counterpart, although it still does climb vertically while firing. It is often used by enemies in Last Stand in the Campaign.

However, when compared to the FMG9, it has similar damage at close range (but the FMG9 still needs one less bullet at long range to kill), a similar recoil and rate of fire, and most of all, a much smaller magazine even with Extended Mags. And considering the fact the G18 is locked until a high level, the G18 is an uncommon weapon to encounter while playing in multiplayer.

The G18 is available for both Survival and Mission modes.

The G18 is used by enemies in Last Stand in several Mission Mode challenges.

The G18 is available in Survival Mode by default and costs $1500. 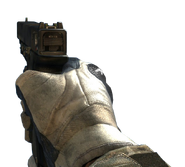 First person view of the G18.

A Delta Force operator wielding a Silenced G18.
Add a photo to this gallery

Retrieved from "https://callofduty.fandom.com/wiki/G18?oldid=1502459"
Community content is available under CC-BY-SA unless otherwise noted.