Hey! User! Drop the chips and get me some images!
This article is in need of quality images. Feel free to upload and/or insert some into the article.
Specific image(s) needed: for Ghosts and Advanced Warfare

For similarly named character in Call of Duty 4, see Gaz.

The Paris variant, note the additional antennae and shattered windscreen.

Front view of the GAZ. 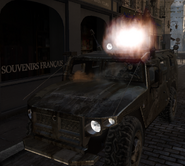 Two GAZ-2975s ambush Frost, Sandman and Grinch on the van.

GAZ-2975 reappears in Call of Duty: Ghosts, where it is used by the Federation. It sometimes has a mounted DShK on its hatch.

The GAZ-2975 appears in Call of Duty: Advanced Warfare as a vehicle used by the Korean People's Army during the level Induction. The player must flank it in order to destroy it and move along. The Atlas Corporation also uses the GAZ to a certain extent; first demonstrated during a simulated KVA assault on Camp David in one of their training facilities. Later, more can be seen driven around by Atlas HazMat teams cleaning nuclear radiation in Detroit, and KVA who took over them.