For a similar scorestreak, see AGR.
For a similar utility within the Zombies map Shadows of Evil, see Civil Protector.
For the robotic infantry unit encountered in the campaign, see General Purpose Infantry Unit.

The GI Unit (stands for General Infantry Unit) is a scorestreak featured in Call of Duty: Black Ops III. It is an AI soldier that can patrol an area or guard a player. A friendly GI Unit emits blue lights and an enemy GI Unit emits red lights (from their front and back). It requires a scorestreak of 1600 to acquire. The GI Unit is based on the General Purpose Infantry Unit from the campaign, who carries the same shorten name.

The GI Unit uses a BRM with an infinite magazine capacity, allowing it to assault enemies without ever slowing down. It can withstand high amounts of gunfire and explosive damage and does not flinch when damaged, making it very dangerous to counter from up close. 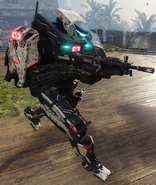 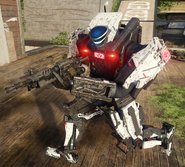