Call of Duty Wiki
Register
Don't have an account?
Sign In
Advertisement
in: Call of Duty: Black Ops

"Men have sought to make a world from their own conception and to draw from their own minds all the material which they employed."
— GKNOVA6, quoting Francis Bacon

GKNOVA6 was a viral website that functioned as a promoter for Call of Duty: Black Ops. The flash site originally consisted of an old television with five vertical lights (one for each "channel"), with other televisions being turned on as the site was updated. The site originally contained many references to the Cold War and nuclear weapons, including a photograph of John F. Kennedy delivering a speech about the Cuban Missile Crisis. Its name bears a resemblance to the biochemical agent Nova-6, which is featured heavily in Black Ops.

In one piece of intel in Call of Duty: Black Ops, the GK company is said to have been used by the Soviet Union to distribute Nova-6 to its agents in America.

Following the official Black Ops reveal and the site's own decryption, the site was radically changed to show frantic images of Zombies running unleashed in an unknown facility. This is actually what the game looks like when the player selects the Zombies option in the main menu.

GKNOVA6 has since been taken down.

Discovery of the site

In early April 2010, an unmarked USB storage device was sent to several video game sites such as IGN[1] and Kotaku.[2] It contained a text file[3] with the following words:

The acronym of these words forms CIPHER.

It also contained an audio file[4] in which a man says: "What we wish, we readily believe, and what we ourselves think, we imagine others think also." This is followed by a woman saying:

The quote is from Julius Caesar. These suggest to use the Caesar cipher which consists in shifting each letter to Nth position after the original (N is fixed for each text) to encrypt it. In this case, the three sounds indicate that it has been shifted three times to encrypt it, so the letters must be shifted back three (letter D) times in order to decrypt the code:

This code has been first decrypted by video game blog Joystiq.[5]

When first visiting the site, another audio file will play. This file is exactly 1 minute and 15 seconds long, a possible reference to Element 115.

Then both voices spell the letters "N O V A S I X" repeatedly (some letters are spelled by the man, and others by the woman but the scheme is irregular). "Hell is Purple" can eventually be heard.

Bacon's quote indicates that it has been encrypted using the Baconian cipher. Since this cipher is too complicated to be decrypted manually, "Hell is Purple" suggests to use the Internet site, Purple Hell featuring a tool for encrypting/decrypting Baconian ciphers. The cipher consists in replacing each letter of a plaintext by a group of five of the letters A or B. It must be considered that each letter spelled by the woman is A and each letter spelled by the man is B during the "N O V A S I X" scheme. There are two versions of the Baconian cipher: the two sounds after the M O D indicate to use the second version of Purple Hell's converter.

The second transmission shows a group of officials and a picture of J.F.K.

"On the Lower Rhine and in Westphalia he commanded for the League."
— GKNOVA6's male voice

Count Gronsfeld is the person the man was talking about. So the code has been encrypted using the Gronsfeld cipher, a variant of the Vigenère cipher. 1 9 6 9 is the cipher key.

Matt_Teddy on Twitter cracked the code, which he thought to be "CLASSIFIED ANNOUNCEMENT SOLD." It was later found out that it was actually "Classified Announcement SOMD."

This lead to SOMD.com, a website for Southern Maryland which is where the packages were sent from. The website is used for local news, event planning and community announcements. There was an announcement within this site pertaining to GKNOVA6, posted by a user named "Eve Reign." The posted announcement was a long and entirely lettered cipher:

Cheeping River and Cheering Viper are anagrams of Vigenere cipher. Using the word "SPUTNIK" as the passphrase for this cipher, MrToasty on movieviral.com decrypted it[6]:

When put into numbers, this decrypted code indicate five major locations during the Cold War:

"They used the earth's magnetic field X the information was gathered and transmitted."
— GKNOVA6's male voice

The quote is from the decrypted plaintext of the Kryptos sculpture's second part. It has been solved using a keyed Vigenère cipher[7] also known as Quagmire III.

"Nothing in life is to be feared it is only to be understood. Now is the time to understand more so that we may fear less."
— Marie Curie

"Outside of consciousness there lies the cold and alien world of actual things."
— Heinrich Hertz

The quote from Kryptos may first seem to suggest using the Quagmire III as the cipher following the previous transmissions. But this is only a misleading, and the 4 sounds after the M O D indicate the 4th tableau of the Kryptos' transcript.[8] The letters of the tableau's first line must be numbered:

Then, each number spelled by the woman must be replaced by its associated letter from the tableau's first line:

A Google search with the keywords "usenet", "dragonsbreath" and "nova six" leads to a thread within the conspiracy discussions of Google Group. A user named Nova Six posted the following:

These are all nerve gases of the G-Series.

The first part of the transmission has been solved by Shizzire of the CoDz forum.[9]

A male voice is heard saying "Azure has the task." This is repeated three times.

If the temporal frequency is analyzed, the following words are found: Napoleon = d Karl = b.

The NOVA TRUTHSEEKERS group was updated with a new post from Nova Six:

Searching the third line of the "transmission" revealed another Google group with a link to a download. The download required a password, which was found when another group started by the same user had the fourth line spell out with the first letter of each word, MASON. A document that was supposedly signed by John F. Kennedy (the blotted out signature looked nothing like his) was found in the download with the first letter of each sentence spelling out TREYARCH, confirming the developer's involvement in the viral site.

The link leads to a picture of a top secret document from the White House posted by Azure and under it in text is what Azure deciphered from the picture. A Flickr user by the name of GKNova6 commented the following.

This document can be seen in the Uncut Reveal Trailer for Call of Duty: Black Ops which was released on May 18 at 8:30 pm EST.

The woman starts out the transmission by saying this:

By performing a spectral analysis upon the sound, following text can be found:

Note that the text is cut from its rightmost side.

If this is shuffled around something like this shows up, apparently it all fits together perfectly:

The rest of this document can be found here. This was in a suitcase with a GK logo on it. It was given to CODZ.

Searching about nsam55 brings up a letter sent from JFK to the Joint Chiefs of Staff in 1961. The letter is hard to read and is typed above the actual letter.

Full credit to Jurryaany for finding and decoding the letter 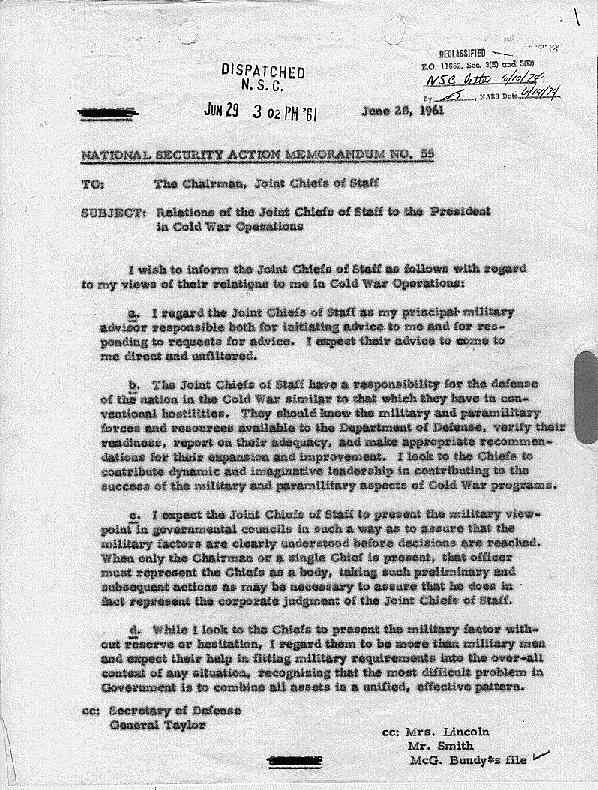 At the beginning of the transmission, a woman starts off by saying:

After that, she says letters that could be the possible password.

After reading the swf file, it reads /(--FREEDOM)+-. It can be rearranged with the five three letter code resulting in TRD/(SRA-SRC-7)+DRB-IRE. Substituting identification numbers results in 1915032/(2010032-2010022-7)+0510032-0002036 and adds up to 1146340. 1146340 is the password for the screen. Upon entering the password, it shows the full screen of what appears to be a medical area. A man can be heard breathing heavily, some machines, and a EKG machine. Also, there are three television screens that cycle the same patter over and over again. When combined, the circles form the GK symbol.

The world premiere trailer contains references to the GKNOVA6 site, confirming once more that the latter is related to Call of Duty: Black Ops:

During the preview event of May 21, 2010, CoDz's administrator "carbonfibah" received a mysterious brief case with the GK logo.[12]

The contents of the briefcase can be found here

The website changed to an orange hue and all of the screens showed clips of zombies moving about, scientists fleeing, scientist corpses being reanimated, experiments, corridors and rooms within some facility, a helicopter flying over the area before crashing, boards being ripped off, and soldiers firing. In the background, a zombie walks by and attempts to break in. The number 47093 can also be seen multiple times. Also there is a red flashing light indicating a place where they're testing zombies. In one screen, a scientist is shown leading a man into a chamber with the letters BHИMAHИE above the door. The scientist then straps down the man's arms and places a mask over his mouth. Bнимaниe is translated from Russian to English as "warning." The website actually is what the room looks like when the player selects the Zombies option in the main menu.

If one should treat this number as April 7, 1993, it coincides with a nuclear accident at the Tomsk-7 Nuclear facility in Seversk, Russia.