The Gas Mask is used in the level "Crew Expendable". It is also worn by some of the Ultranationalists, most of whom carry G36Cs.

First person view with the mask on.

Griffen with a gas mask on.

An Ultranationalist wearing a gas mask.

The Gas Mask as it appears in Rebirth. 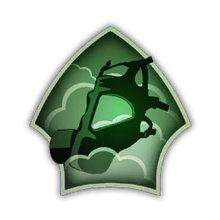 The Gas Mask as it appears in the perk icon.

) Make it through the Nova 6 Gas without dying on Rebirth Island.

Chemical Agents also use Gas Masks as part of their equipment.

Yuri putting on his mask.

The Gas Mask is used in the campaign level "Identity Unknown" and "Deadly Mist".

The Gas Mask appears in the campaign level "Struck Down", where it is put on right after the player uses the Remote Sniper for the second time. The player then is able to use Tear Gas against the enemies, with the Gas Mask protecting the player and other Ghosts from its effects. It affects the player's HUD similarly to past games. The Gas Mask is removed after the Ghosts locate Ajax. In addition, gas masks are seen at the start of "Sin City", where Federation soldiers can be seen wearing them. In multiplayer, a Gas Mask is worn by the Maniac.

A gas mask worn by a Federation soldier in Homecoming.

The Gas Mask is a buildable feature in the Zombies map Zetsubou No Shima. Once equipped, players will not cough when entering a cloud of gas left by a spore. It will break once it has been used enough, although a fresh Gas Mask can be equipped once the old one is destroyed. Players can also use the Gas Mask to increase the amount of the time the player can breathe underwater.

The gas mask is comprised of three parts:

Various Gas Masks are present in Call of Duty: Modern Warfare and Warzone.

Throughout the campaign mode, Al-Qatala fighters, Barkov's Forces, Farah and Hadir Karim, and Alex all wear a variety of different Gas Masks.

The Gas Mask is a piece of equipment found in the Battle Royale game mode of Warzone. Once equipped, it will allow the player to survive in the gas for 15 seconds without taking damage. The Gas Mask is dropped upon death.

Gas Masks return in Call of Duty: Black Ops Cold War in the campaign level Desperate Measures and as a cosmetic skin on many operators.

A Gas Mask on Price's head.

The Gas Mask returns in Call of Duty: Vanguard as a cosmetic item.