"I think little dragon will be Nikolai's new best friend! Yes I do! Yes I do! Won't you little dragon? As long as he doesn't set Nikolai on fire..."
— Nikolai Belinski when taking out the Gauntlet of Siegfried

The Gauntlet of Siegfried is a weapon in Call of Duty: Black Ops III on Gorod Krovi. It is a Dragon Whelp that sits on a Element 115 infused iron gauntlet.

The Gauntlet itself is hidden within the Trials grave and requires a new Dragon Whelp to sit on it. To get a fresh Whelp, a Dragon Egg must be obtained and taught the ways of hunting.

The only non-broken Dragon Egg remaining in the Hatchery is nestled above the sewer grate back to the Stalingrad square, shooting it will cause it to tumble down to the right side of the grate and allows it to be picked up.

With the Dragon Egg held, it needs to be placed on a nest to be bathed in dragon fire. The nests are located in places where the Dragons overhead can land to breath fire. When done, the egg will need a full round to cool down before it can be picked up once more.

With the egg once again held, it must be taught the ways of hunting. These three trials are tracked in order by the Trials gravestone as the fourth trial. The trials must also be completed in order of:

With the three trials completed, the egg can be taken back to the Hatchery's basement level to an incubator to be hatched. Doing so will trigger a lock-down akin to that of a Groph Pod defence. With the defence being completed, the egg must once more cool to be picked up.

S.O.P.H.I.A. will alert when it can be picked up and doing so will award 5,000 experience and allow the fourth trial to be completed at the Trials gravestone. Activating it will cause the Gauntlet of Siegfriend to rise from the ground and be available to take.

The Gauntlet of Siegfried allows the player to wield Dragon Whelp in a similar fashion to how a Falcon is used in Falconry. While the Whelp is perched on the Gauntlet, it can be commanded to breath fire in a similar fashion to a Flamethrower just with the fire being tinged green. The Whelp can also bite as a melee option with the bite being stronger than the Bowie Knife.

Alternate fire calls the Whelp to take to the air, acting in fashion to a sentry whilst launching fireballs at any nearby enemies. However the Gauntlet also gains the ability known as 115 Punch, which is a high damaging trusting punch that can send basic zombies flying if hit by it.

First person view of the Gauntlet of Siegfried 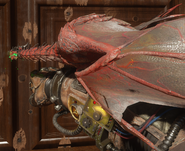 Meleeing with the Gauntlet of Siegfried

The Gauntlet of Siegfried without the dragon 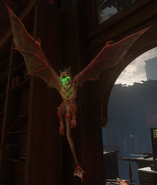 The Whelp in flight