Call of Duty Wiki
Register
Don't have an account?
Sign In
Advertisement
in: Call of Duty: Black Ops III Factions

The General Purpose Infantry Unit (G.P.U.I, G.I.U, G.I), informally known as the Grunt or Bipedal Robot, is a humanoid combat robot seen in Call of Duty: Black Ops III. Grunts are mass-produced robotic infantry in wide use by most major military forces and even by smaller factions, private corporations, and terrorist groups.

Grunt armies are controlled by a distributed A.I. hivemind network, which typically prevents Cyber Core users from taking direct control of them, although their physical functions and even friend-or-foe indicators can still be hacked.

The General Purpose Infantry Unit is a bipedal robotic platform intended for security and battlefield deployment. It was brought to market in its first revision by the Coalescence Corporation in 2040.

As much as its much-vaunted advanced artificial intelligence routines that could allow it to operate autonomously, it was the devices' humanoid appearance captured the public's imagination, sparking furious "for and against" arguments on both sides of the debate on the ethics of the use of robots on the battlefield.

Standing at a little over 6 feet 2 inches tall, the GI's form follows that of our own, designed, according to the Coalescence Corporation, to allow it to be able to make use of the same equipment, operate the same systems and fit in the same spaces onboard vehicles as conventional troops.

Due to legislation that prevented the deployment of a robotic weapon system with no human in the "kill loop" - the control process by which a decision is made to engage a target with lethal force - the product was initially a commercial failure; detractors claimed that delays caused by having a human monitor, command and call targets made the robots' reaction times too slow to be effective in a combat situation.

Despite intensive lobbying and extensive political donations, it wasn't until 2048, when the GI unit, already on its 3rd major hardware revision, was declared fit for autonomous operation in a landmark decision by the US Supreme Court.

Unsurprisingly, the other Winslow Accord nations followed suit within months, clearing the way for broad scale military deployment and record profits for the Coalescence Corporation. Faced with a gap in military capability, the policy makers of the CDP were not far behind in revising their own restrictions on the deployment of combat robots.

GIs performed exceptionally, and with construction and maintenance costs falling all the time, dropping below the per-unit-cost of training and supporting a Human soldier in 2052, it should come as no surprise that they make up the bulk of both the CDP and Winslow Accord' frontline fighting forces at time of writing in 2063.

When interviewed in 2058, Pete Pfeiffer, the Coalescence Corporation's Director of Public Relations was asked if the popularity, reliability and success rate of the GI had surprised the company. He had this to say:

"You don't bring a product like this to market without extensive testing, simulation and re-testing, you may well ask if we're surprised that you don't see them fall over more frequently. The neural-nets in the GI's locomotive system were taught using over a decade of real-world motion data harvested from sensors in our exoskeleton products. Their decision making systems have been trained using the same simulations we use to train our regular forces, only at vastly accelerated timescales. In 2040, when we brought the GI program to the public's attention, our AI systems had racked up as many simulated combat hours as were fought in the 20th Century. By now, I expected that the combined simulation training time is in excess of all of the combatant hours in the history of Human conflict. So, I guess you could say that we were pretty confident the thing would work."

The US government debated extensively on clearing GIUs for combat - in June 2042, the US Senate rejected (73 to 25) a proposal to begin implementing measures to see GIUs deployed as early as 2044. It was the third time the battlefield robotics bill had been rejected.

Although they fight with standard infantry weaponry, Grunts behave significantly differently from human soldiers, steadily walking forward into combat instead of attempting to utilize cover.

Grunts do possess a degree of self-preservation programming and can dodge sideways several feet in an attempt to evade gunfire. They are typically equipped with assault rifles, shotguns, or submachine guns, and are generally not assigned sniper rifles or explosive weaponry. They also cannot utilize grenades.

Grunts do not seem to speak any human language but do make high-pitched electronic vocalisations during combat.

Grunts are more durable than human troops due to their armored plating and mechanical nature, and are capable of surviving several bullet hits from most automatic weapons, although they can still be brought down with one or two high-caliber rounds or shotgun blasts. Headshots are also not necessarily lethal to Grunts, who can fight on without a head.

They are usually vulnerable to cyber cores such as Enhanced Protocol Override, Mass Short-Out, Adaptive Immolation, Mass Paralysis and Mass Weapon Lockout, to name a few.

They are also significantly stronger than a human being, capable of easily ripping a human's limbs off their bodies or lifting a human by the throat off the ground using only one arm. However, cybernetically augmented Cyber Soldiers are strong enough to overpower them, and even skilled normal humans such as Rachel Kane can defeat a Grunt in melee combat by evading their attacks and using a firearm to target their weak spots.

In the missions Hypocenter, Lotus Towers, and Life, the local Grunt armies are taken control of by the Corvus A.I. through one of its hosts. Grunts under Corvus' direct control often behave in an atypical manner not consistent with their existing programming, often abandoning their weapons and charging forward directly at enemies, detonating themselves when they get close.

Grunts controlled by Corvus are resistant to Cyber Core hacking or their higher functions such as their friend-or-foe indicator, although they are still vulnerable to abilities that target their physical functions.

A squad of GI Units, backed up by a C12, surround Richtofen, Nikolai and Takeo in the Undead Siege comics.

Grunts have a variety of models, differing in the appearance of their head and embellishments on their torso, as well as colour. These appear in different parts of the campaign. There is also a slightly different Grunt model that was used in the live action trailer for Black Ops III and which still appears in Combat Immersion and Multiplayer, both as an NPC and as an environmental asset on several multiplayer maps. Curiously, it was also present in the Reveal trailer for the game in multiple campaign missions but was replaced by other models for most missions prior to release, though it can still be found on the levels Hypocenter and Provocation. It has a generally thinner appearance, possessed a differently shaped head, lacked as much armour plating and had built in smoke grenade launchers. 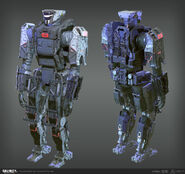 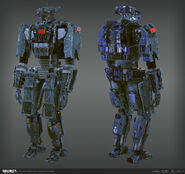 A Squad of GI Units and a C12.
Community content is available under CC-BY-SA unless otherwise noted.
Advertisement