"Headquarters for the Division Of Mechanical Evolution (DOME) located on the California coast. Frantic close quarters action that doesn't slow down."
— In-game description

Genesis is a multiplayer map featured in Call of Duty: Infinite Warfare. It takes place in an abandoned Greycube Dynamics Facility, in California, U.S.A.

Genesis is a small map in Call of Duty: Infinite Warfare that has many close-quarters and mid-range combat situations. The layout of the map follows the same format as the Ghosts map Strikezone and MW3's Dome. The two main spawn points are near the "dome" itself, and near the entrance gate on the other side of the map.

The dome serves only as a relatively inconsequential corridor between two of the outdoor sections. Sniping is not an advisable strategy in Genesis due to the map's compact nature. Nearby the "dome" is a stairway with two entrances. On the opposite side of the map to the 'dome', the bar can be found in roughly the same configuration as it appears in Ghosts, minus the corridor that links one of its side-entrances to the area atop two of the four staircases.

One of the main influences on Genesis' design is the need to facilitate wall-running, so in addition to adopting a more open layout than either Dome or Strikezone, it also features taller walls that end relatively closely to one another. 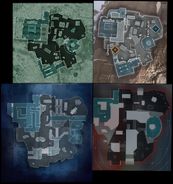