The Director
The Godfather of all Zombies

"Years ago, I did research for a World War II movie. I came across some old Nazi documents. I couldn't believe what I was reading. Element 115, necromancers, raising the dead, real creepy stuff. The coolest thing? Some of that crazy shit happened right here."
— George A. Romero

George A. Romero stars as a special Zombie in the Zombies map Call of the Dead. Romero was doing research for a World War II movie when he came across Nazi documents pertaining to Element 115.[1]

Romero spawns sometime before round one, in front of Quick Revive. A lightning strike is seen, and Romero emerges through the water.

George's lightning entrance.
Add a photo to this gallery

George was at first human while working on a zombie movie with Danny Trejo, Robert Englund, Sarah Michelle Gellar and Michael Rooker. During one of the breaks due to a mistake by Michael, a real zombie crawls out of the window and snatches Romero away and later infecting him with Element 115. Romero has a different reaction to Element 115 than most humans usually do. Instead of becoming a zombie, he retained the ability to talk, and is not always aggressive, unlike his blood thirsty counterparts. However, Romero gains a craving for human flesh, and there are several quotes directly relating to his new cannabalistic ways.

When first appearing, Romero is calmly walking around while groaning as a massive blue aura surrounds him. Sometimes when he is calmed down after attacking, he says in a scared voice "I'm okay, I'm okay", indicating he cannot control these fits of rage. He will sometimes roar, similar to his "berserk mode". This will make the Zombies nearby sprint towards the player. In this state, except for the blue aura and orange eyes, he looks fairly human.

After being shot or touched, Romero transforms into his "Berserk State". This involves chasing the players, striking the ground with his Stagelight, roaring spontaneously, and a change in appearance. In this state, his clothes are ripped, and the exposed flesh is rotten and decomposing. He also can electrify surrounding Zombies in this state by striking the ground with his Stagelight weapon, allowing the Zombies to give off an electric charge if they get too close. To return Romero to his calm state, lead him into water and he will return to his calm state or shoot him with the V-R11. However, the latter one will only calm him down temporarily, and he will go berserk again after approximately 10 seconds. He will also enter berserk state if he hits a player.

Romero has extremely high health and it takes a lot of time and ammunition to damage him enough to retreat. Pack-A-Punched Dragunov or L96A1 work best, as they will do 1,000 damage per shot (if every shot hits the head) respectively, being able to neutralize him in the matter of two/three magazines. The Death Machine can work effectively as well, although it will take several machines before enough damage is done. Upgraded Ray Guns and upgraded light machine guns work well together. Another good way of killing Romero is when the player has 15000-25000 points to go to the Mystery Box and lure Romero around. Once the player has exhausted their weapon's ammunition, using the Mystery Box again and repeating. This might take a while as some weapons are better than others. Another effective way to kill Romero is to get a Pack-a-Punched Scavenger, and use every shot they have to lower his health significantly, usually 24 body shots will cause him retreat. (Note: This weapon starts out with 6+30 rounds, so aim carefully) Upgraded assault rifles have multipliers ranging from 2.5 to 9.5x against George. The Famas has the highest multiplyer at 9.5. Pack a punched Assault rifle damage (per shot) ranges from 500 (Aug) to 1425 (Famas). If one were to hit the hit the head, the damage would be upped to 2,500 and 7125 respectively.

As George takes more and more damage, the blue aura around his stage-light will start flicking, then if damaged more, it changes to orange. During this near-death state Romero's speed increases. (He will also begin to roar much more often). When finally damaged enough, he will retreat into the water, then return to the game after two rounds have passed, including the round when the player neutralized him.

Romero's health does not increase throughout the higher rounds. His health is based on the number of players in the game; Romero has 250,000 health for every player in the game.

George Romero can be made to retreat into the water for several Rounds. This is done by luring Romero into the water and then shooting him with the Pack-A-Punched V-R11. He will still utter phrases from underneath the island that Quick Revive is located on until he reemerges just as he does at the beginning of the match, minus the lightning effect. 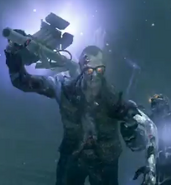 Orange Light signifies Romero is almost dead.
Add a photo to this gallery

George A. Romero's weapon is a Stagelight with exposed wires protruding out of the end causing it to glow blue. The weapon takes two hits to down a player, or three hits with Juggernog, dealing a massive 90 damage per hit to the player, whereas a normal Zombie only does 50 damage per hit ( Zombies alike), he can also use it to strike the player when close enough. When Romero strikes the ground with his stage light, the player is slowed. However, the zombies remain at normal speed and can easily down a player until the effects of George's stage light wear off. Romero will only use his weapon when shot by the player or when a player comes within close range. (Note: the 90 damage George does has essentially the same effect of a zombie's 50 damage if you are hit only once, as the zombies will still require four additional hits to down you. Only after you are hit a 2nd or 3rd time does George's 90 damage become relevant).

George Romero attacking with a Stagelight.

Romero's electrocution effect.
Add a photo to this gallery

/ Bronze Trophy 15px) - Cut the lights on the Director.

Main article: Call of the Dead/Quotes

Romero coming out of the water.

George entering the water, calming him down. 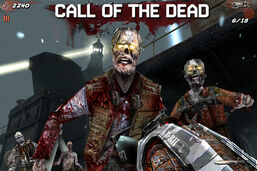 George A. Romero in Call of the Dead : Director's Cut
Add a photo to this gallery

Retrieved from "https://callofduty.fandom.com/wiki/George_A._Romero?oldid=1561644"
Community content is available under CC-BY-SA unless otherwise noted.