Major Gerald Tiberius Ingram was a British soldier, part of the British Special Air Service during World War II. He appears in Call of Duty, Call of Duty: United Offensive and Call of Duty 3.

"Ingram has fought with many heroes and lost many men, so it can be tough to impress him. But he does give credit where credit is due."
— Call of Duty 3 description.

Major Ingram rescued Sgt. James Doyle who later became part of SOE with the help of a group of Dutch Resistance after he saw his bomber go down. Major Ingram operated closely with the French Resistance in 1942. On July 12, 1943, both Doyle and Ingram lead an assault force to destroy a German battery on Sicily. Though most of the squad was killed, Ingram and Doyle escaped in a boat. Ingram was then transferred to France where Doyle is reunited with him a few months later.

Ingram also fights during the Normandy Breakout with members of the French Resistance. He leads a night landing in France along with Sgt. Doyle, and Cpl. Duncan Keith. Major Ingram later fights in an assault on a fuel plant, but is soon lost as his jeep explodes. Later Major Ingram is found again during the mission, "Hostage!" where he is found being held hostage, yet again, in a German-controlled house.

Later in the war, Ingram was captured and held prisoner at the chateau in the Alps. He gets transferred to Dulag IIIA in Strasshof, Austria. Ingram was later on freed from captivity by a squad of American troops. 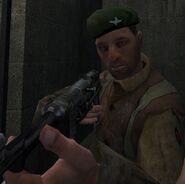 Major Ingram in Call of Duty 3.

Ingram's profile in the bonus materials.

Ingram armed with a MP40.