Call of Duty Wiki
Register
Don't have an account?
Sign In
Advertisement
in: Articles needing citations, Countries, Places,
and 2 more

Germany (German: Deutschland), officially known as the Federal Republic of Germany (German: Bundesrepublik Deutschland) and formerly known during the Cold War as West Germany and it's other half as East Germany (German Democratic Republic) (German: Deutsche Demokratische Republik) of when it was divided between the two states before later unifying, is a country in central Europe with its capital being Berlin. Germany does not have a major role in any Call of Duty game except for Call of Duty: Modern Warfare 3. The German flag is also seen in Call of Duty: Heroes as a decorative item.

In Call of Duty: Black Ops, Germany is only seen in the multiplayer map Berlin Wall where the country's flag is seen hanging off of buildings.

The multiplayer map Munich was also planned for Call of Duty: Black Ops which would have been set in Germany, but it was scrapped and later released as Stadium, which is set in America.

Germany is also seen in the Zombies mode, in the map Kino der Toten and the revamped versions of Nacht der Untoten, Verrückt and Der Riese.

Germany was invaded by Ultranationalist Russia in 2016, during the events of Call of Duty: Modern Warfare 3, in which garrisoned United States Army personnel aid in the defense of Berlin. The northern city of Hamburg was also attacked and severely damaged in the invasion. This is the first time when Germans appear as allies in the Call of Duty series.

Erwin Kloos of SATO Retribution is a technician who works alongside Captain Reyes , he is one of the few survivors of the Retribution . The German flag can be seen on the shoulders of many coast guard members.[citation needed]

Flag of the German Democratic Republic during the events of Black Ops and Black Ops Cold War. 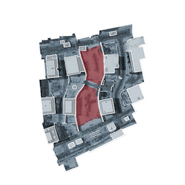 The mini map of Berlin Wall. 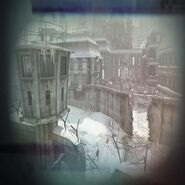 The loading screen of the multiplayer map Berlin Wall. 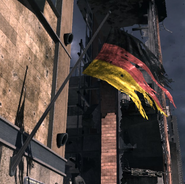