Call of Duty Wiki
Register
Don't have an account?
Sign In
Advertisement
in: Call of Duty: Infinite Warfare Gametypes

"Spawn with a random lethal gesture, a throwing knife, and custom pistol with no starting ammo. GL;HF"
— Gamemode description.

Gesture Warfare is a time-limited gamemode featured in Call of Duty: Infinite Warfare that allows players to kill other players with Gestures. It was available for play from September 22nd, 2017 to September 25th, 2017, from October 6th, 2017 to October 13th, 2017, and from December 18th to ____. with double XP present for the latter[1][2].

Inside the current version of Gesture Warfare, players spawn with nothing but a Kendall 44 with no ammo (called the "Box-of-Demons"), a Throwing Knife, and a random gesture which can be activated by default or with the tactical grenade button. Gestures, when used to kill another player, will cycle through a preset list, similar to the weapon rotations of Gun Game. All players are given the gesture Bang Bang at the start of the game. Certain gestures produce certain effects upon enemy players. After one kill, the player is awarded Steady Aim, after three kills, the player is awarded Scavenger, after five kills the player is awarded Quickdraw, and after seven kills the player is awarded the Specialist Bonus. The gamemode is played in a Free-for-All, with the score limit being 20 kills.

The previous version contained a slightly different ruleset, notably Scavenger was awarded after one kill, the player was given a Combat Knife, players started the game with a random gesture as opposed to the Bang Bang gesture and Steady Aim was awarded after three kills. 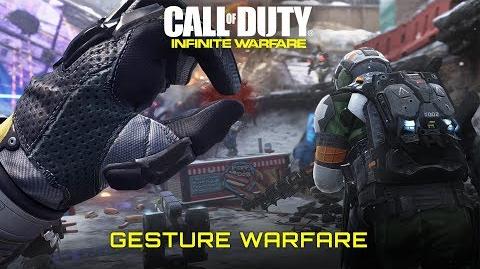