mp_hillside_ss
Getaway is a Multiplayer map for Call of Duty: Modern Warfare 3 and it can be only played with the Face Off game mode.

This map takes place at a beach house in Brazil. There is a pool near the house that is filled with water, staying underwater immediately blurs vision, and after a long period of time deals damage.

Getaway features several floors of the house along with a deck, lawn, and grassy path for fighting. The middle, indoor portion of the map focuses on close-range combat, whereas sticking to the outside of the map is more likely to produce short to mid-range encounters. SMGs and shotguns are recommended for this map.

Teddy Bear easter egg in the bedroom. (Only viewable in spectate or with Assault Drone wallbreach glitch.) 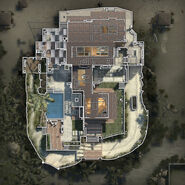 The S.S. Ackrich, the boat off the dock of the house.