For the camouflage's successor, see Optical Camouflage.
"Stay low and move slowly, we'll be impossible to spot in our ghillie suits."
— Cpt. MacMillan

A ghillie suit is a type of camouflage clothing designed to resemble heavy foliage and to minimize the wearer's distinguished outline against the environment. Snipers wear ghillie suits to blend into their surroundings when they feel it is important for them to camouflage and hide themselves from enemies or their targets.

They are issued to Lt. Price and Cpt. MacMillan during the missions "All Ghillied Up" and "One Shot, One Kill" in Call of Duty 4: Modern Warfare's campaign. An American Sniper team wearing Ghillie Suits also appears in the mission "Ultimatum".

In Call of Duty 4: Modern Warfare's multiplayer, players that equip sniper rifles in their primary weapon slot on the SAS vs. Spetsnaz maps will be able to use ghillie suits. This does not apply however to the maps Wet Work, Vacant, Chinatown, Killhouse and Shipment, as snipers will simply have a normal outfit. In the remastered version, the USMC was able to equip ghillie suits before the Christmas update, but since then the original models have been used.

Character Model for a SAS sniper wearing a ghillie suit.

A Suppressed M21 covered to blend in with the Ghillie Suit using the same material.

In Call of Duty: World at War's campaign, most of the Japanese soldiers on Peleliu and Okinawa have their uniforms fitted with foliage for cover.

There are no ghillie suits in Call of Duty: World at War's multiplayer. Instead, the soldiers armed with bolt-action rifles or the PTRS-41 will have natural foliage tied together for camouflage. The best examples would be the Russian or Japanese team who use a large amount of foliage to conceal themselves. Other teams such as the Americans get a camouflage patterned uniform with notably less foliage than the Japanese and Russians which are tied to their uniforms and helmets. The German Army will have soldiers appear in a standard issue Wehrmacht camouflaged uniform with the sleeves rolled up and a helmet with netting to allow a large amount of foliage to be added quickly for cover.  Soldiers using Overkill will wear a suit with less foliage.

In Call of Duty: Modern Warfare 2, Archer and Toad use ghillie suits in the mission "Loose Ends." Soap will also wear one in the mission "The Enemy of My Enemy", but with a darker brown shade. The ghillie suits are also implemented into Special Ops; there will be enemies equipped with ghillie suits that take potshots at the player from a distance, or may even use a pistol at closer ranges. However, after doing so, they will change their position, as to keep their location a secret.

In multiplayer, when a player begins to rank up, there are no ghillie suits available when equipping a sniper rifle. Instead, the soldiers will be wearing a lightweight camouflage pattern uniform with hoods or balaclavas depending on each team. Ghillie suits have to be unlocked by completing the challenge "Ghillie in the Mist" which is achieving a certain amount of one-shot kills with sniper rifles throughout the player's playtime. The first set completed will unlock arctic camouflaged ghillie suits for snow maps, the second will unlock the urban/woodland ghillie suit for use in wooded areas and on urban maps. The last set will unlock the ghillie suit for desert environments. As the player unlocks ghillie suits, the old uniform of that type will be discarded.

In Call of Duty: Black Ops, the way Ghillie suits can be obtained has changed, since the player now needs the perk Ghost to obtain the suit.

An actual ghillie suit is used by the SOG, the Op40 team, the Spetsnaz troops in snow environments, and the Black Ops team when operating in snow environments. The other teams will have makeshift changes to their uniforms such as foliage or camouflage netting, such as the NVA or the Tropas, while other teams don't even use ghillie suits like the Spetsnaz or the Black Ops team in urban environments, which can be a huge setback to snipers. Although this may be a setback for snipers, for rushing classes, this can be a huge bonus as now it provides an opportunity for rushing classes to be more difficult to see in the map. When combined the the Perk's "Pro" version, the lack of red-name indicator and appearance on thermal optics allows the wearer to remain largely undetectable when hiding amongst foliage.

The ghillie suit is worn by Derek "Frost" Westbrook while providing sniper support to the Task Force 141 team. However, when he assists them during the exfil, he only wears his Delta Force uniform.

Frost (right) in his ghillie suit.

The ghillie suit does not make a prominent return in the campaign as it did in the past Modern Warfare games; however, it can still be equipped in the multiplayer.

Like Call of Duty: Modern Warfare 2, it can be unlocked for use by completing the "Ghillie in the Mist" challenges by obtaining a certain number of one-shot sniper kills. Until the challenges are complete, a hooded character model will be used.

Some maps equip the player with a ghillie suit by default, even if they have not completed any of the challenges. They are: Bakaara, Mission, Village and Fallen.

The Africa Militia is the only faction to not equip the ghillie suit.

Note: players who equip a sniper rifle as their secondary via the overkill perk are not rewarded with the suit. 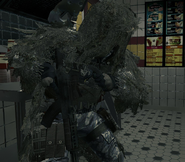 Ghillie suits as they appear in Modern Warfare 3. 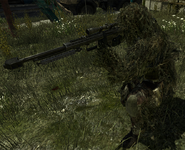 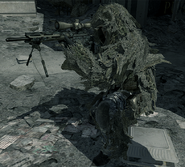 The ghillie suit returns in Call of Duty: Online, however unlike previous versions of the game, using a sniper class is not required in order to use the ghillie suit in this game. This is due to the character customization system Call of Duty Online uses where it is considered clothing, rather than class/faction based.

In the reveal trailer for Call of Duty: Ghosts, soldiers wearing ghillie suits and holding AK-12s can be seen jumping out of a Eurocopter EC-635 into a grassy terrain, and the pilot also wears a ghillie suit. In the mission "The Hunted", Federation soldiers wearing Ghillie suits will attack if the player breaks stealth around the end of the level. If the player looks on their wrist-mounted Heartbeat Sensor, there will be countless enemies (literally, since there are just large red blotches meaning that many, many ghillie enemies are around). However, they do not pose much of a threat, the player can simply kill them while they charge at the player.

It is briefly seen in the multiplayer reveal, as part of the create-a-soldier system.[1]

There is an Operation called "Bigfoot Sighting", which is earned by killing an enemy wearing the Ghillie Suit by melee. It gives the player the "Messin' with Sasquatch" patch.

Soldiers with Ghillie Suits jumping out of an Eurocopter EC-635.

One of two Ghillie Suit models as seen in Call of Duty: Ghosts multiplayer, known as "Concealed Cobra."

Operators Ghost, Grinch, Syd, Talon, Otter and Golem can wear either partial or full ghillie camouflage, most of which available through certain unlockable or purchasable skins.

The Ghillie Suit returns in Call of Duty: Black Ops Cold War as a cosmetic item for the Operators.

The Ghillie Suit returns in Call of Duty: Vanguard functioning as a cosmetic item like in Modern Warfare and Black Ops Cold War as well as being seen in Numa Numa Trail worn by the Imperial Japanese Army. 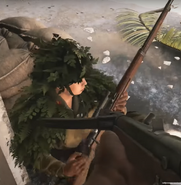