Mistress
The Lady of The House
Witch
Ms. Brown
Ma' (by Jeb Brown)

The Ghost is a special enemy that appears in the mansion in Buried. Ghost hover above ground and float towards the player. For every hit the Ghost gets on a player, 2000 points are subtracted from their points count. If the player is out of points, they deal damage akin to regular zombies. Ghosts spawn infinitely within the mansion and stop spawning when players leave the building.

Every four to five rounds, players can obtain a Random Perk Bottle power-up by entering the house when the lights are on. This will cause all zombies to disappear when a player enters and Ghosts will eventually drop the Perk Bottle once all players are outside the mansion and the last Ghost is killed. In co-op, when entering the mansion when the lights are on, multiple Ghosts spawn even outside of the mansion, targeting all players.

If the player kills a Ghost, they will receive a free grenade and, if purchased beforehand, a free Claymore.

The 'Ghost' is a floating woman with brunette hair and pale white skin. She is dressed in typical half mourning attire; a dark dress with a veil and capelet. She has tears streaming down from her left eye. She has a purple blood and dissipates upon death.

The Ghost randomly appears in a window of the house while outside the vicinity, and disappears at random. At times, it is possible to hear her talking quietly, uttering phrases such as "This is my house." and "You do not belong here."

There is a second method to obtain a free perk revolving the Ghost[1]:

In the Saloon there is a dartboard on the wall and a small white line on the ground. Hitting a bullseye on the dartboard behind the white line with a Ballistic Knife will cause the Piano in the Saloon start playing a song by its own.

The player then has approximately 90 seconds to reach a second Piano location in the back part of the mansion. There, a ghost is seen playing the piano the same song that is played in the Saloon. Players can get a free random perk (possibly exceeding the 4 perk limit) when tipping the Ghost with 10 points by interacting with the pink box on the Piano to the right of the Ghost.

Ghost being slowed down by the Paralyzer. 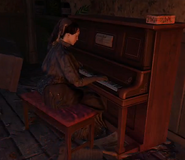 Ghost playing the piano in an Easter egg.

Render of the Ghost's model.