For other uses, see Ghost.

Ghost prevents players from being shown on radar while an enemy Spy Plane is in the air, similarly to how UAV Jammer and Camouflage work. Ghost also brings the ability to wear ghillie suits without using sniper rifles into multiplayer.

Ghost's Pro version prevents automated killstreaks, with the exception of Dogs, from attacking the player (on the Wii version, it only protects the player from Attack Dogs). In addition, it removes the red box that marks targets for the player-controlled killstreaks such as the Gunship (Note, though, that attempting to shoot these down with missiles may expose the player to the enemy as the smoke trail is easy to spot). It also prevents the player from glowing white in the Infrared Scope or in a Camera Spike. Additionally, Ghost Pro hides the player from Tactical Mask Pro's ability to show the location of enemies the player has affected with a Concussion Grenade or Flashbang. As a final effect, the red crosshair and name do not appear when an enemy aims at a player using Ghost Pro. However, Aim Assist still targets Ghost Pro users.

Contrary to the in-game description of Ghost, neither Ghost or Ghost Pro will protect the player from an SR-71 Blackbird, Dogs (except on the Nintendo Wii version), or Motion Sensors.

"Cannot be detected by enemy UAVs while moving, planting or defusing bombs, or while controlling Scorestreaks."
— In-game description.

Ghost returns in Call of Duty: Black Ops II, but it has been altered slightly; the player cannot be detected by UAVs while moving at a decent speed, planting or defusing the bomb in Search and Destroy or Demolition, or while using controllable Scorestreaks except for the Lightning Strike. It should be noted that the player has to be moving constantly at a certain speed across the map to be protected from a UAV; simply moving in a small circle or back and forth in the same spot at walking speed will not work. However, the movement speed requirement is nullified when planting/defusing bombs or controlling scorestreaks; as these require the user to stand still, Ghost will remain active so long as the player is performing that action. Once the player is done performing that action, the requirement to be on the move is re-activated. Ghost does not protect the player from an Orbital VSAT. The yellow arrow on the mini-map will slightly fade when Ghost is active.

The exact minimum speed that a player must be moving in order for Ghost to remain active is fifty percent of the base movement speed. This means that strafing with several weapons will render the user slow enough for Ghost to not be active while strafing. However, this can be fixed on weapons by using an Adjustable Stock, which will allow the user to move at a pace of at least seventy percent of the base movement speed, sometimes higher depending on the weapon. [1]

Compared to its previous incarnation, Ghost is much more limited in its effect, with it being far less suitable for defensive, stationary playstyles due to the constant need to be moving for the effect to be active. As well, Ghost only counters the UAV while providing no other effects. Despite its limitations, Ghost can be very helpful for a mobile player, as these players can navigate around the map undetected while a UAV is active. Ghost is also especially effective in objective game modes in Demolition and/or Search and Destroy when the enemy has a UAV active, as the enemy team will often rely on the UAV to indicate when the enemy is planting or defusing a bomb, which can buy the user precious time to perform these actions safely, especially against those under the guise that standing still to plant/defuse a bomb will reveal the Ghost user's position.

Comparison of Ghost on the minimap. (The yellow arrow is faded, on the left, if the player has Ghost activated)

"Cannot be detected by enemy UAVs while moving, planting or defusing bombs, or while controlling Scorestreaks."
— In-game description.

Ghost returns as a tier one perk in Call of Duty: Black Ops III, and is unlocked at level 38. It functions identically to its incarnation in Black Ops II, albeit slightly nerfed; the speed at which the player must move to keep Ghost active has been increased, preventing players from activating Ghost while crouching with any weapon or moving while aiming with assault rifles, sniper rifles, and LMGs that have a Stock attached, as well as aiming with pistols. SMGs and shotguns still keep Ghost active when moving while aiming with the Stock, but cannot do so without the Stock. 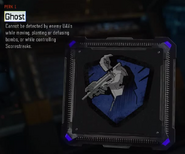 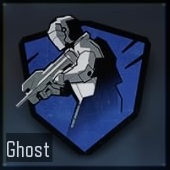 Ghost returns in Call of Duty: Infinite Warfare. It makes the user invisible to UAV. Similar to the Call of Duty: Black Ops version, it remains active even when the user is not moving. This perk directly counters UAV and Warfighter's Ping trait. It is unlocked at level 18.

After a patch, it was made that the Advanced UAV could now counter Ghost users at all times. 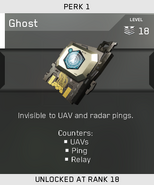 Ghost being unlocked in multiplayer. 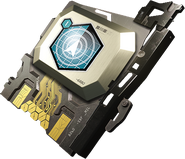 Ghost returns in Call of Duty: Black Ops 4 as a Tier 3 perk.

Ghost returns in Call of Duty: Mobile as a Tier 2 perk.

Ghost returns in Call of Duty: Modern Warfare as a Tier 2 perk. As with in previous games, it makes the user invisible to UAVs, in addition to Personal Radars and Heartbeat Sensors. Ghost users are still visible when an Advanced UAV is active, but they are shown as red dots instead of arrows.

Before the 1.14.0 Perk rebalancing update, it also granted immunity to Snapshot Grenades. This trait was moved to the perk Battle Hardened.

"Undetectable by enemy Spy Planes whenever you are moving, planting or defusing bombs, or controlling Scorestreaks."
— In-game description.

Ghost returns in Call of Duty: Vanguard as a Tier 1 perk.