"Return home on the day everything changed."
— Mission Description

"Ghost Stories" is the first campaign mission of Call of Duty: Ghosts. In it the player takes control of Logan Walker and Spc. Baker.

Elias tells his sons David "Hesh" and Logan Walker the legend of how 15 unnamed soldiers killed hundreds of soldiers, earning them the name "Ghosts" by an unknown survivor. When Elias finishes, Hesh asks his father if he really believes that story, to which Elias replies that he does. Elias, Hesh, and Logan return home as "tremors" shake. Upon returning to the street, however, Elias realizes that it is not an earthquake - the ODIN space weapon is laying San Diego to waste. Elias tells Hesh and Logan to get to the house as he gets the truck. Going home, the house starts to collapse. Hesh asks Logan to help him open the door that's jammed, He counts off: "Three, Two, One - push!"

Just as they push the door open, the screen cuts to white. The game moves to the orbit of Earth, 15 minutes earlier, with Spc. Baker and Kyra Mosley. Going into the ODIN station, they find themselves under attack from Federation infiltrators. Baker and Kyra make it to the fuel lines of the other ODIN unit and Baker shoots it, sacrificing himself and Kyra in order to prevent further ODIN strikes.

Returning to the present with Hesh counting and open the door, an ODIN strike breaks part of the road. Going into another house, Hesh and Logan run out as a gasoline truck explodes, injuring Logan. Elias and Hesh help Logan make it back to the truck, as Hesh gets into the back and Elias drives away as the brothers gaze at the destruction.

Kyra Mosley closing a door during the takeover. 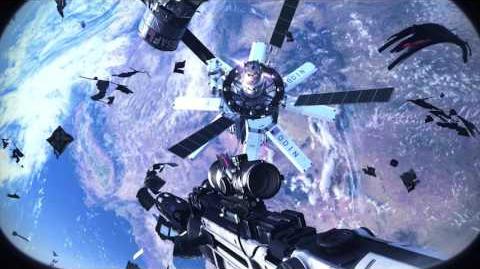