"The giant robot may be our greatest scientific achievement... made possible only because of Element 115."
— Edward Richtofen

There are two types of Giant Robots: the Riese (Giant in German), used by Germany, and the Gigant (Giant in Russian), a copy model used by Soviet Union during World War II.

In Origins, there are three Rieses that roam the map, and they are described as "thousand-foot-tall robot abominations." Their names are Freya, Odin and Thor, named after three gods in the Norse mythology. In The Giant, an unfinished Riese is present in the background of the map. It is later rebuilt and present in Der Eisendrache, where it is destroyed, and later seen outside the map once more.

In Gorod Krovi, there are two destroyed Gigants, fallen due to the dragon's attack.

The Robots were created by Group 935 to help the Central Powers win the Great War. Two main scientists, Ludvig Maxis and Edward Richtofen contributed to their construction. According to Richtofen, building the Rieses was only possible due to Element 115.

In Origins, three Rieses roam the area around where the map takes place. Periodically, they will enter over the map itself, stepping down upon large foot-shaped craters in the ground. Lights placed around these areas will flash red when a Robot is about to step down upon the ground. A Robot is capable of killing zombies and downing any players caught in its foot's radius when it takes a step. It is possible for a player to enter the inside of a Riese by shooting at the lights on the undersides of their feet. Doing so results in a maintenance hatch opening up that will transport the player to their head when the Robot steps on them. It should be noted that only one of the Robots' feet will have the lights lit at a time. Additionally, when all three of the Robots tread the map at once, only one of the Robots can be entered. A piece for the Staff of Wind and an Audio Log can be found inside each Robot. There are no zombies inside the robots, however the player is allowed a limited time within the Robot. The player will be automatically ejected in approximately 30 seconds after entering, or they may eject at any time by activating one of the hatches. If a player has unearthed the Golden Helmet with the Shovel, they can survive being stepped on by a Robot, instead only becoming stunned for a while after the robot's foot clears out. Interacting with the robots is vital for obtaining the Staff of Wind, and moreover, completing Little Lost Girl. In addition to collecting the parts for Staff of Wind, three of the staffs must be placed in each of the robots' heads, and later on a red button in each head has to be pressed before throwing a G-Strike onto the seal near Generator 5.

An inactive robot is present in The Giant. It is located behind the starting room, with its head hooked on a crane. An easter egg, which involves using the teleporters with Monkey Bombs inside, will activate the robot's head, making it fire a laser beam at the Der Riese sign, bouncing off it and melting the snow on the other side, revealing a hidden Perk machine.

This robot is present in Der Eisendrache, as it is fully constructed and used by the young original characters to pursue the truck that carries the original "Tank" Dempsey. The robot is disabled by a Panzerschreck that was fired by one of the soldiers in the truck. During gameplay, it is seen laying, now damaged, at the base of one of the mountains, near a town.

In Gorod Krovi, the robots are seen employed by the Soviets, and feature the Soviet Star rather than the Iron Cross on their chests. These are used as traps around the map in which the beam in their visor activates, shooting a laser at a certain area of the map, killing the zombies that go through it.

In Rumble, in one of the starting spawn rooms, there is a poster in bold words reading "The Giant" with a picture of a Riese behind the words.

In Der Schatten, the ruins of a destroyed Giant Robot can be seen throughout the map.

All the three robots roaming the map

The interior of a robot

The opening on a Giant Robot's foot 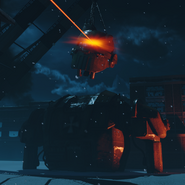 The Giant Robot after completing the easter egg in The Giant.

The Giant in Der Eisendrache. 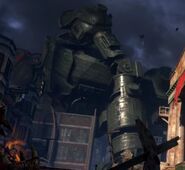 A disabled Giant Robot with a red star on his chest and his head in Gorod Krovi. 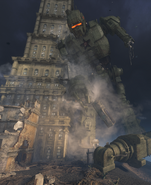 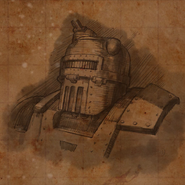 A drawing of the Riese model of the Giant Robot as seen in the Zombies Chronicles timeline poster.

The head of a Giant Robot, as seen in Der Schatten.