The only instance in Call of Duty 4: Modern Warfare where gibbing is seen is when Lt. John Price ends up sniping off Imran Zakhaev's left arm with a Barrett .50 cal in the level "One Shot, One Kill".

Players can gib throughout the entire game, decapitating and blowing off limbs. Gibbing is also required to complete the multiplayer challenge, Gib Factory in Call of Duty: World at War.

The following weapons can gib:

An Imperial Japanese soldier with a dismembered hand

Gibbing in Zombie Mode
Add a photo to this gallery

Gibbing works almost identically to Call of Duty: World at War in Call of Duty: Black Ops due to utilization of an identical, albeit modified game engine and assets. It can only be done in single player and Zombies. Explosive weapons that go off near enemies will usually cause gibbing. When an enemy loses their limb, they will often not immediately die. If one loses their arm or leg, they will stand and clutch their wound before dying. This rule applies to all gibbing in Call of Duty: Black Ops. If an enemy is stuck with an explosive-tipped Crossbow, they will not always lose a limb. When gibbing occurs by explosive, the player will often see an upward arc of blood fly in the air with the gib on the far end of the arc. Friendly forces cannot be visually "gibbed" however some wound sustained in combat will cause them to enter a similar animation state as gibbed enemies by clutching their "wound" even though all limbs remain intact. Unlike in its World at War instalment, enemies combatant's head do not explode or "decapitate" when shot at the head with any caliber weapon. This feature is however, retained in Zombies.

In the mission "S.O.G.", the player blows an enemy completely in half when an NVA soldier tackles Mason and he unpins a grenade attached to one of the soldier's webbings. Limbs and even pieces of bone can also be seen after the gruesome explosion. In "Victor Charlie", Mason's Python in the Rat Tunnel blows off limbs very easily at close range.

The following weapons can gib:

A Viet Cong fighter with his legs blown off 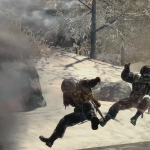 More gibbing
Add a photo to this gallery

In Zombies mode, the player can gib zombies with the Grenade launcher. If a grenade explodes near a zombie, its legs will get blown off. The player can also gib by throwing a regular hand grenade at the zombies.

Gibbing is, once again, seen very briefly in Yuri's flashback to "One Shot, One Kill" in "Blood Brothers", when Zakhaev loses his arm.

Gibbing can be done in Call of Duty: Black Ops II, but in the campaign and Zombies only. Most of the weapons can gib such as all shotguns, light machine guns, and sniper rifles. In the campaign, it is no longer possible to gib enemy heads with firearms or explosives, but special melee weapons (such as the machete) allow for decapitations. It is worth noting that gibbing is surprisingly rare in the campaign. For the most part, shooting an enemy will only result in blood splatter. Whether or not the player will gib an enemy depends mostly on chance.

With shotguns like the M1216, gibbing almost never occurs on full-auto. If the player burst fires, they have a better chance of removing a body part. A glitch occurs quite often in the game where the enemy will grab their shoulder or hip as though they have lost the limb, but it will still be attached. Gibbing in Zombies is almost the same as in Call of Duty: World at War and Call of Duty: Black Ops.

In the intro cutscene of the Extinction map "Awakening", Samantha Cross uses a machete to cut off David Archer's infected right arm.

Gibbing is seen in the mission "Induction", where Mitchell, the playable character, is hit by a piece of shrapnel that severs his left arm.

Several scripted gibbing sequences occur during the campaign, most notably in the first mission "Black Ops", where the Player's arms are ripped off by a combat robot.

Some weapons such as the P-LAW, the F-SpAr Torch and the Ballista EM3 are able to gib enemies in Call of Duty: Infinite Warfare. Moreover, when fighting Settlement Defense Front soldiers, they will explode into a large bloody puddle particularly when certain weapons are used such as Seekers and frag grenades. In addition, the helmets of most SetDef soldiers can be shot off or knocked off using a melee attack. Enemy robots are also susceptible to gibbing especially when energy weapons are used.

Decapitation is present, as well as dismemberment; enemies' clothes will get soaked in blood upon death, and there is a burning damage model.

Gibbing is featured in Call of Duty: Black Ops 4 in both Multiplayer and Zombies mode. In Multiplayer, characters can lose limbs from explosive or killstreaks.

Gibbing is also present in the Specialist HQ intro cutscene in which Battery lost both of her arms and Jessica Mason-Green part of her mouth.

In Call of Duty: Mobile, gibbing can be done with the "Ascended" Mythic blueprint of the Fennec submachine gun, available in Season 11.

Gibbing makes a return in Call of Duty: Modern Warfare in a few instances. In the campaign mode, gibbing only occurs when using Hadir's Sniper Rifle featured in the missions Highway of Death and Into the Furnace.

While not present at launch, gibbing, including dismemberment and decapitation, was enabled (if chosen by the player) in multiplayer after Title Update 1.14 on February 11th, 2020[1]. It occurs when using powerful killstreaks such as VTOL Jet or Infantry Assault Vehicle. Weapons with explosive ammo like the Rytec AMR and the JAK-12 are also able to gib enemies.

Additionally, various weapon blueprints such as the PKM Bludgeoner and the AK-47 Black Bear have the ability to gib enemies. Most of the dismembering blueprints have "HEI" stated next to their ammo name during gameplay.

Gibbing makes a return in Call of Duty: Black Ops Cold War in two ways. While absent from the campaign, gibbing is easy to accomplish with almost any item against the Undead in Zombies mode. Limbs can also be blown off from air strikes in Multiplayer mode.

Sticking an enemy with a semtex, and using a launcher such as the Thumper or the RPG can cause the gibbing of limbs of an enemy player.

Retrieved from "https://callofduty.fandom.com/wiki/Gib?oldid=2558947"
Community content is available under CC-BY-SA unless otherwise noted.