For the Dead of the Night character, see Gideon Jones.

"If you need a job done right, regardless of the risk, Gideon is your man. Captain Gideon turns recruits into advanced soldiers at Atlas. For him, it’s more than just outfitting grunts with the latest gear. It’s turning them into the best soldiers in the world."
— Gideon description on the official Call of Duty website

Captain Gideon is the deuteragonist of Call of Duty: Advanced Warfare. A friend and partner to Jack Mitchell, he assists Mitchell throughout the campaign and appears in almost every mission. He also appears in the alternate-canon Exo Survival mode on the map Riot.

Defection to Sentinel in Antarctica and Destroying the Manticore Factory

Gideon is sent into Antarctica after Sentinel attempts to dispose of a large shipment of Atlas' new experimental biological agent Manticore. Gideon and two Atlas soldiers Juarez and Michaels hold Mitchell, Ilona, and Cormack at gunpoint, but Gideon who has deduced that Ilona was right about Irons, betrays and shoots Juarez and Michaels. After he helps Sentinel dispose of the Manticore shipment. Gideon joins the Sentinel Task Force but has distrust with Cormack before their mission in Bulgaria. Mitchell gets Cormack to let Gideon on the ground in bio lab in Bulgaria that is producing Manticore. He and Mitchell escape from Atlas soldier who EMP their hover craft, the two use cloak to hide from Atlas PMC's. Regrouping with Cormack and Knox, the team infiltrate the lab and destroy it and escape in a T-740 Hovertank. Gideon then destroys the Hovertank, gaining Cormack's trust in the process.

After Irons declares war on the governments of the world, Gideon assists Mitchell in repelling Atlas forces in San Francisco, but they fail to prevent an attack on the Golden Gate Bridge that wipes out thousands of civilians, police forces and Sentinel operatives. Sentinel launches an attack on the Atlas headquarters in New Baghdad, which Gideon takes part in, but the Sentinel forces are wiped out after Irons deploys Manticore. Mitchell, Ilona and Gideon are unaffected, as they are former employees of Atlas and their DNA is on Manticore's database. The three are taken to an Atlas prison camp, where they learn of Irons' plans to launch Manticore rockets at every major military base in the world. They escape, but Cormack dies from blood loss, caused by a fatal gunshot wound inflicted by Irons. Mitchell, Ilona and Gideon vow to kill Irons and stop Manticore from being launched.

In one final act of desperation, Gideon and Mitchell infiltrate Atlas' Command Center using A.S.T. mech suits to enter as Ilona guides them. Entering by the river to the underground launch center and slaughter every PMC in their way, they make it to the launch chamber and push themselves to the rockets. As the rockets are preparing to take off, Gideon and Mitchell destroy the engine's generator and stop the rocket, in the process of their mech suits being destroyed and Mitchell incapacitated. Gideon helps Mitchell and carries him to the lobby as the two finish the rest of PMC's, changing their goal, they hunt Irons. When the two reach the spire, they are greeted by Irons who shuts down their exoskeletons. Irons explains his ideologies and intentions, elaborating on his disappointment in Mitchell and his ultimate goal to liberate the world, beginning with extermination. Irons makes an escape, Gideon tells Mitchell to manually unlock his exo, doing so, Gideon's exo will not unlock. Gideon orders Mitchell to stop Irons, Mitchell runs ahead and catches up to Irons, who ends up falling off the top of the Atlas headquarters. Gideon arrives in time to help an injured Mitchell, and the two begin to leave.

Gideon appears in the alternate-canon Exo Survival Mode in the Exo Survival map Riot after completing the final wave, during the ending cutscene. He is in the Warbird that comes to rescue the player. After successfully picking the player up, he checks to make sure the player's character is alright. After doing so, he looks at the huge wave of zombies attacking the prison. Unfortunately, he gets pulled out of the Warbird by a zombie.

Gideon as seen in the Collapse trailer.

Gideon with Cormack in Armada.

Gideon with an AMR9 about to help pick up Mitchell. 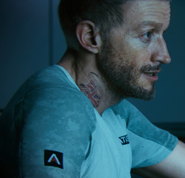 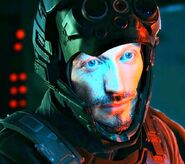 Gideon looking down on a crowd of Zombies