For the Call of Duty: Advanced Warfare character, see Gideon.

The Gunslinger
Prince of Pistoleers
Tex
Braggart (by Dark Godfrey)

Before 1892, Texas, United States of America

Welling, Alistair's Folly, and any weapon obtained by the player.

Any equipment obtained by the player.

"Screamin’ sons ‘a’ bitches are everywhere. We gotta hunker down, circle the wagons, and try to find ourselves a way out."
— Gideon Jones

Gideon Jones is one of the four playable characters featured in the Call of Duty: Black Ops 4 Zombies map Dead of the Night. He was a cowboy for a stage show, something that Godfrey once attended, according to himself.

At some point in time, Gideon became a cowboy, and would later join a stage show in America. In 1912, Gideon was amongst hundreds who were invited to Alistair Rhodes' mansion in England to have a party. While there, he would meet up with Madame Mirela and Brigadier General Jonathan Warwick, both of whom were interacting with other guests. The three would soon meet up with the butler Godfrey on the balcony overlooking the main hall, questioning him on where Alistair was. However, members of The Order would soon activate a Sentinel Artifact upon kidnapping Alistair, causing the guests to be turned into zombies. However, the four are able to avoid being turned into zombies thanks to a ritual circle Godfrey had drawn prior to the arrival of the three on the balcony. The four soon arm up and fight off against the undead.

The four are able to complete the trial caused by the Sentinel Artifact after defeating the Shadow Werewolf in the nearby ruins, ending the infestation at the mansion. Returning into the mansion, the four head to the Smoking Room, where Gideon comments that they need to find the bar, having worked up a thirst from all the fighting. During this, he places his Welling on a table before the Brigadier spots an apparition of another Sentinel Artifact in the next room. While Madame Mirela questions what it meant, Dark Godfrey, having taken over Godfrey and seized a blade from a wall, explains that it means that they are not worthy before decapitating Madame Mirela. Gideon attempts to defend himself by pulling out his pistol from his holster, only to realize that he left it in the previous room. Gideon was soon slashed across the stomach by Dark Godfrey, causing him to stumble backwards and knock into a candlestick, causing the mansion to light ablaze shortly after Dark Godfrey killed the Brigadier and Dark Godfrey himself was shot through the heart by Scarlett Rhodes. 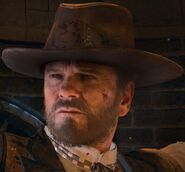 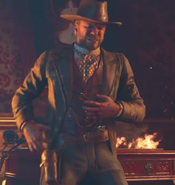 Retrieved from "https://callofduty.fandom.com/wiki/Gideon_Jones?oldid=2484251"
Community content is available under CC-BY-SA unless otherwise noted.