Call of Duty Wiki
Register
Don't have an account?
Sign In
in: Call of Duty: WWII Scorestreaks

The Glide bomb is a score streak featured in Call of Duty: WWII. When activated, An Azon bomb will be dropped if the player is on the Allies while a Fritz-X bomb will be dropped instead if the player is on the Axis.  As the bomb is deployed, movement keys are inputed by the user to direct the drop upong impact. This has a medium area of effect but very effective against small bands of enemies. 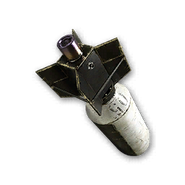