Free (after Zombies Chronicles)
500 (first use, originally)
1500+ (after first use on the same round)

"Mmm, I can't tell you how many times I've found this stuff stuck on the underside of a theater chair!"
— Nero Blackstone

"What I chew, I chew only to secure a better tomorrow."
— Edward Richtofen

GobbleGums can be obtained by interacting with an active GobbleGum Machine, but only one GobbleGum can be held or kept active at a time. With the launch of Black Ops III, there was only only one active machine in the map, switching locations similarly to a Mystery box after repeated usage. As of the March 21, 2016 update, all GobbleGum locations are active at all times.

Before starting each match, players can choose and customize a pack of GobbleGum in the Zombies menu, which include a total of five different GobbleGum balls. When in-game, a player can find and activate a GobbleGum machine, which will randomly dispense one of the five GobbleGum balls that player has chosen, granting the player the bonus or ability of that GobbleGum.

As players rank up with the progression system, more GobbleGums are unlocked, allowing for a variety of bonuses to be used in-game. Only one GobbleGum can be equipped at a time, and equipping another gum will replace the current GobbleGum and end its effective in case it was active. There is usually one GobbleGum machine in every area of every map.

There are four types of GobbleGums indicated by their patterns:

Each GobbleGum is color-coded depending on how they are activated:

The player character will blow a bubble and activate the GobbleGum's effect.

The Descent map pack introduced a new type of GobbleGum, classified as Whimsical, with a second Whimsical being released with the Salvation, and a third and fourth released with the Zombies Chronicles packs. Whimsical GobbleGums present only cosmetic and aesthetic effects and do not affect the gameplay considerably.

As of the release of Zombies Chronicles, the first GobbleGum is free, as opposed to the 500 points it was previously. After that, the price will continue to grow but will reset after the round ends. The increase in price will vary depending on what round the player is currently on. Fire Sale reduces the cost by 490 points. For the first nine rounds, the second and third use cost 1,500 and 3,000 points respectively. Afterwards, the prices increase every ten rounds, and the second use is two times the second use from the previous ten rounds minus 500, and the third use is simply double the second use. This chart displays the cost for the first, second and third uses for every round. The price stops increasing after round 100. With these prices, players can purchase from the GobbleGum machine up to three times per round.

GobbleGum balls have their effect's color and have a picture illustrating their effect. The GobbleGum machine is supported by a grey stand. At the bottom of the machine, it is mostly red with some grey and six yellow light bulbs. On the sides and back is more red and grey. Above those is a grey, circular sign with a "5¢" message on it, while above that is another message quoting "Chew until you die!". Above the messages is a grey coin slot and GobbleGum dispenser with a message quoting "GobbleGum" on it. Atop the machine is a red sign that has a yellow, circular light at the top of it and a message quoting "Dr. Monty's". Below it is a dark grey lion head with red eyes and the glass container of GobbleGum balls underneath it. By the top of the glass container is another message quoting "GobbleGum".

The following five Classic GobbleGums are unlocked by default:

The following ten Classic GobbleGums are unlocked by ranking up in Zombies:

Firing On All Cylinders

Now You See Me

The following four Classic GobbleGums have no gameplay effect or advantage in-game. In some cases, they alter the physics of the gameplay or the appearance of objects in the game, for the sake of being whimsical.

Have limited uses but are very powerful. Mega GobbleGums can only be obtained through the use of Liquid Divinium in Dr Monty's Factory, or by getting the free GobbleGum in Shadows of Evil or Der Eisendrache. Mega GobbleGums have three different rarities:

There are multiple GobbleGum machines that can found around the map. As of the March 21, 2016 update, all GobbleGum locations are active at all times.

In Shadows of Evil, there is a way for everyone to acquire a free Mega GobbleGum. For this to work, the Pack-a-Punch room needs to be open, each player must acquire Widow's Wine, and must keep at least four Widow's Wine Grenades with them. At the Perk-a-Cola spawn point that is within the Canals, there will be a room with four lion heads. Each player has to throw one Widow's Wine Grenade exactly into each of the lions' mouths. A lion will then roar, confirming the step was done correctly. In each of the mouths, there will be a small, grey GobbleGum that can be picked up and they have to be put on a plate in the candy shop beside Stamin-Up. After surviving three or four whole rounds, the GobbleGums will grow and become normal sized. By holding the use button, each player will acquire one random Mega GobbleGum.

In Der Eisendrache, there is a way too. The player needs to take the little plant near the Teleporter in the Undercroft. The plant is on a table on the right side of the room atop a toolbox. The player needs to hold the action button on it and it will disappear. They will now have the plant and needs to make sure the teleport is going to teleport them back in time, to do this the player needs to get a Wrath of the Ancients and upgrade it to any of the Ancient Bows. They then need to obtain an original Wrath of the Ancients and shoot each antenna on the top part of the Teleporter, the player will hear an audio cue when they have done it correctly. There will now be random objects around the map that are sparking that the player needs to shoot with an upgraded Ancient Bow. If they take too long, messes up or shoots it with anything else there will be a fail audio cue, forcing them to do it again the round after. If done correctly the player will hear an audio cue. For more info on this see My Brother's Keeper. When the player heads back to the teleporter the bottom light will be purple, all players in the game must then be in the teleporter to teleport back in time. When the player is back in time they need to place the plant on the toolbox where they originally found it. To do this they need to hold the action button on the toolbox like before. When the player gets teleported back, the plant on the table will be back and it has grown to a full plant. Now they can hold the action button on it and they will obtain a free random Mega Gobblegum.

A GobbleGum machine in Shadows of Evil.

A poster in Shadows of Evil advertising GobbleGum.

An example of a GobbleGum Pack.

A GobbleGum Machine in The Giant. 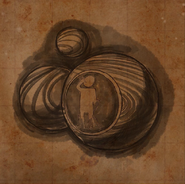 A drawing of three GobbleGum balls as seen in the Zombies Chronicles timeline poster. 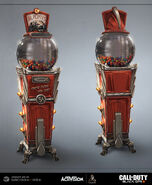