Goh Xiulan (English: "Elegant & Graceful Goh") is a character that appears in Call of Duty: Black Ops III. She is one of the leaders of the 54 Immortals, along with her younger brother Goh Min.

Having lost her brother and been maimed at the hands of Winslow Accord agents, Goh Xiulan swore vengeance against the CIA. She tracked down Taylor and Hendricks to the abandoned Coalescence facility, where they found and killed Javier Ramirez in the process of leaking more sensitive information regarding the CIA, including the locations of their worldwide safehouses. Once Xiulan received this information, she ordered her men to flood the facility in the hopes of drowning Taylor and Hendricks.

Now with full knowledge of the CIA's undercover operations in Singapore, Goh Xiulan rallied her forces and led a devastating attack on the CIA's Singapore safehouse, located outside the quarantine zone. Capturing and torturing Taylor's handler Rachel Kane, Xiulan was killed after Taylor disobeyed orders to evacuate Singapore and chose to rescue Kane.

She is a figurehead leader of the 54 Immortals. She first appears in the level "Provocation" where she attempts to leak CIA information before being interrupted and knocked out by Jacob Hendricks and the player, who proceeds to sever her right hand in order to gain access to her computer and cancel the leak.

In Corvus' simulated version of events, the Player enacts the role that Taylor played in reality, cutting off Goh Xiulan's right hand at the bio-domes and eventually killing her at the the Singapore safehouse. The Player's augmented strength allows them to overpower Goh Xiulan after she attacks them; since Taylor did not have these augmentations in reality, it is likely that he killed her in a different fashion. 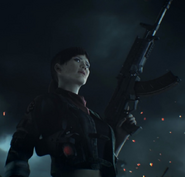 Xiulan in "Hypocenter", armed with a KN-44

Xiulan killed by the Player
Add a photo to this gallery

Retrieved from "https://callofduty.fandom.com/wiki/Goh_Xiulan?oldid=2325406"
Community content is available under CC-BY-SA unless otherwise noted.